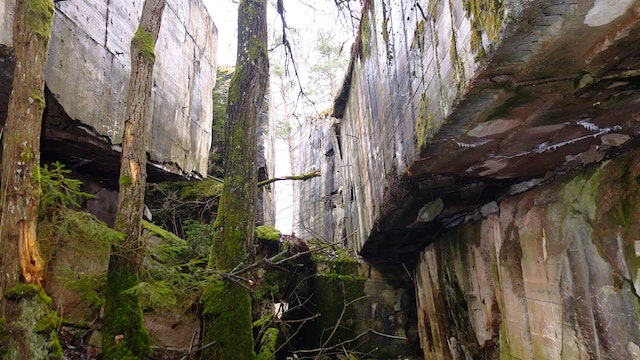 Hidden in thick forest near the hamlet of Gierłoż, 8km east of Kętrzyn, is one of Poland’s eeriest historical relics – 18 overgrown hectares of huge, partly destroyed concrete bunkers. This was Hitler’s main headquarters during WWII, baptised with the German name of Wolfsschanze (Wolf’s Lair). A famous attempt to assassinate the Führer took place here in July 1944.

The location was carefully chosen in this remote part of East Prussia, far away from important towns and transport routes, to be a convenient command centre for the planned German advance eastwards. The work, carried out by some 3000 German labourers, began in autumn 1940; about 80 structures were finally built, including seven bombproof bunkers for the top leaders. Martin Bormann (Hitler’s adviser and private secretary), Hermann Göring (Prussian prime minister and German commissioner for aviation) and Hitler himself were among the residents. Their bunkers had walls and ceilings up to 8m thick.

The whole complex was surrounded by multiple barriers of barbed wire and gun emplacements, and a sophisticated minefield. An airfield was built 5km away and there was an emergency airstrip within the camp. Apart from the natural camouflage of trees and plants, the bunker site was further disguised with artificial vegetation-like screens suspended on wires and changed according to the season of the year. The Allies did not discover the site until 1945.

Hitler arrived at the Wolf’s Lair on 26 June 1941 (four days after the invasion of the Soviet Union) and stayed there until 20 November 1944, with only short trips to the outside world. His longest journey outside the bunker was a four-month stint at the Ukraine headquarters of the Wehrmacht (the armed services of the German Reich) in 1942, overseeing the advancing German front.

Having survived an assassination attempt within the complex in July 1944, Hitler left the Wolf’s Lair as the Soviet Red Army approached a few months later. The German army prepared the bunkers to be destroyed, should the enemy have attempted to seize them. The complex was eventually blown up on 24 January 1945 and the Germans retreated. Three days later the Soviets arrived, but the extensive minefield was still efficiently defending the empty ruins. It took 10 years to clear the 55,000 mines within the complex.

Today, the site has succumbed to Mother Nature; bunkers are slowly disappearing behind a thick wall of natural camouflage, and mosquitos are a pest. It’s best to pick up a site map or booklet sold from stands in the parking area. If you’re in a group, organise a guide to show you around; English-, German- and Russian-speaking guides charge 60zł for a 1½-hour tour. All structures are identified with numbers and marked with big signs telling you not to enter the ruins, advice that many people ignore, including some guides (bunker 6 appears to be the most popular one to enter).

Of Hitler’s bunker (13) only one wall survived, but Göring’s ‘home’ (16) is in relatively good shape. A memorial plate (placed in 1992) marks the location of Colonel Claus von Stauffenberg’s 1944 assassination attempt on Hitler and a small exhibition room houses a scale model of the original camp layout.

You can also continue 200m past the entrance towards Węgorzewo, and take a small road to the right signposted ‘Kwiedzina (5km)’. On either side of this narrow path is a handful of crumbling bunkers that can be explored free of charge.