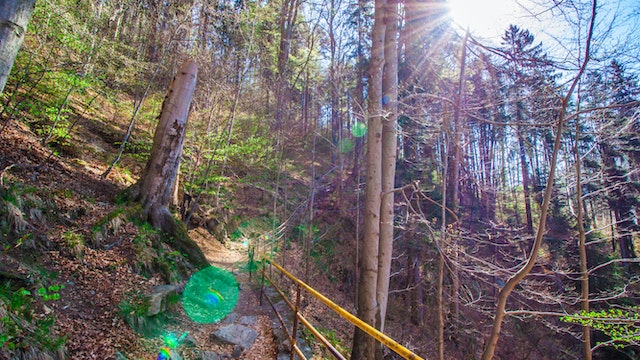 Karkonosze National Park is a 55.75-sq-km belt that runs along the Polish–Czech border for some 25km. The two main settlements here are the resort towns of Szklarska Poręba and Karpacz.

The range is divided by the Karkonosze Pass (Przełęcz Karkonoska; 1198m). The highest summit of the eastern section is Mt Śnieżka (1602m), while the western portion is topped by Mt Wielki Szyszak (1509m). The park is predominantly spruce forest up to an altitude of about 1250m.

The characteristic features of the Karkonosze landscape are kotły (cirques), huge hollows carved by glaciers during the Ice Age and bordered with steep cliffs. There are six cirques on the Polish side of the range, the most spectacular being Kocioł Małego Stawu and Kocioł Wielkiego Stawu near Mt Śnieżka, and Śnieżne Kotły at the foot of Mt Wielki Szyszak.

The Karkonosze range is known for its harsh climate, with heavy rainfall (snow in winter) and highly variable weather, including strong winds and mists at any time of year. Statistically, the best chances of good weather are in January, February, May and September.

The national park is the most popular hiking territory in the Sudetes and boasts 33 trails covering 100km. The two main gateways are Szklarska Poręba and Karpacz, from where most tourists ascend Mt Szrenica and Mt Śnieżka respectively. For longer walks, the red trail runs right along the ridge between the two peaks, with excellent views on both sides. The trail also passes along the upper edges of the kotły. You can walk the whole stretch in six to seven hours. If you start early enough, it’s possible to do the Karpacz–Szklarska Poręba (or vice versa) trip within a day, preferably by using the chairlift to Mt Szrenica or Mt Kopa to speed up the initial ascent.

You can break the walk by taking any of the trails that branch off from the main route, or by stopping at one of the half-dozen mountain hostels.

The national park also has 19 mountain bike trails totalling some 450km; the tourist offices in Szklarska Poręba and Karpacz can supply you with an excellent free map of them.

Whatever you’re into, take warm, waterproof clothes to deal with the unpredictable weather and do get a detailed map of the area. The best one is the 1:25,000 Karkonosze i Góry Izerskie (7zł), which also includes the Izera Mountains of the Western Sudetes, to the northeast of Szklarska Poręba.