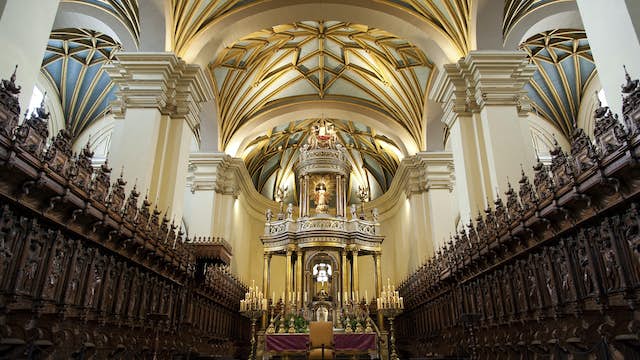 Next to the Palacio Arzobispal, the cathedral resides on the plot of land that Pizarro designated for the city’s first church in 1535. Though it retains a baroque facade, the building has been built and rebuilt numerous times: in 1551, in 1622 and after the earthquakes of 1687 and 1746. The last major restoration was in 1940.

A craze for all things neoclassical in the late 18th century left much of the interior (and the interiors of many Lima churches) stripped of its elaborate baroque decor. Even so, there is plenty to see. The various chapels along the nave display more than a dozen altars carved in every imaginable style, and the ornate wood choir, produced by Pedro de Noguera in the early 17th century, is a masterpiece of rococo sculpture. A museum, in the rear, features paintings, vestments and an intricate sacristy.

By the cathedral’s main door is the mosaic-covered chapel with the remains of Pizarro. The authenticity of the remains came into question in 1977, after workers cleaning out a crypt discovered several bodies and a sealed lead box containing a skull that bore the inscription, ‘Here is the head of the gentleman Marquis Don Francisco Pizarro, who found and conquered the kingdom of Peru…’ After a battery of tests in the 1980s, a US forensic scientist concluded that the body previously on display was of an unknown official and that the brutally stabbed and headless body from the crypt was Pizarro’s. The head and body were reunited and transferred to the chapel, where you can also view the inscribed lead box.

Guide services in Spanish, English, French, Italian and Portuguese are available for an additional fee.