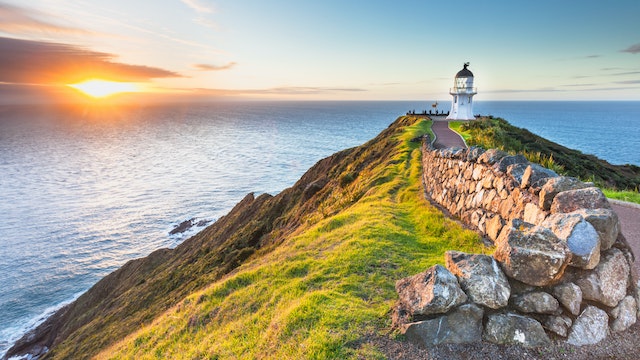 This dramatic headland is where the waters of the Tasman Sea and Pacific Ocean meet, swirling and breaking together into waves up to 10m high in stormy weather.

Cape Reinga is the end of the road both literally and figuratively: in Māori tradition the spirits of the dead depart the world from here, making it the most sacred site in all of Aotearoa. It's also the northern most stop on State Hwy 1.

The actual departure point is believed to be the 800-year-old pohutukawa tree clinging to the rocks on the small promontory of Te Rerenga Wairua (Leaping Place of the Spirits) far below; to those in corporeal form, access is forbidden.

Contrary to expectation, Cape Reinga isn’t actually the northernmost point of the country; that honour belongs to the inaccessible Surville Cliffs, which can be spotted to the right in the distance. In fact, it's much closer to the westernmost point, Cape Maria van Diemen, immediately to the left.

From the car park it's a rolling 1km walk to the lookout, passing the Cape Reinga Lighthouse along the way. Information boards detail the area's ecology, history and cultural significance. Out of respect, you're requested to refrain from eating or drinking in the vicinity.

There are few good accommodation options on the peninsula itself. The DOC has basic but spectacularly positioned camping sites at Tapotupotu Bay. Water, flush toilets and cold showers are provided. Bring a cooker, as fires are not allowed. Pack plenty of insect repellent to ward off mosquitoes and sandflies. ‘Freedom/Leave No Trace’ camping is also allowed along the Te Paki Coastal Track.

Check weather forecasts ahead and be aware there is no shelter after you leave the carpark area. Little tufts of cloud sometimes cling to the ridges, giving sudden spooky chills even on hot days.