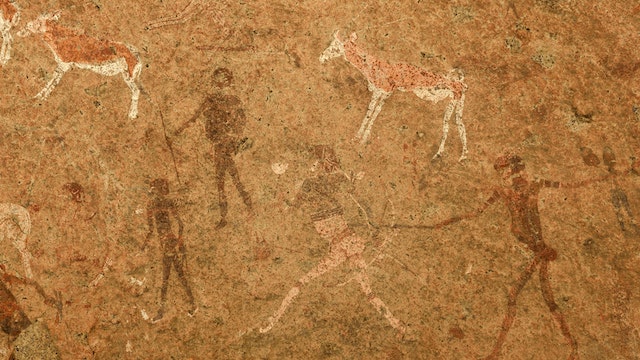 Tsisab Ravine is the epicentre of the Brandberg's rock-art magic. The most famous figure in the ravine is the White Lady of the Brandberg, in Maack’s Shelter. The figure, which isn’t necessarily a lady (it’s still open to interpretation), stands about 40cm high and is part of a larger painting that depicts a bizarre hunting procession. In one hand the figure is carrying what appears to be a flower or possibly a feather. In the other, the figure is carrying a bow and arrows.

While doubts remain as to the subject's gender, the painting is distinctive because ‘her’ hair is straight and light-coloured – distinctly un-African – and the body is painted white from the chest down. The first assessment of the painting was in 1948, when Abbé Henri Breuil speculated that the work had Egyptian or Cretan origins, based on similar ancient art he’d seen around the Mediterranean. However, this claim was eventually dismissed, and recent scholars now believe the white lady may in fact be a San boy, who is covered in white clay as part of an initiation ceremony.