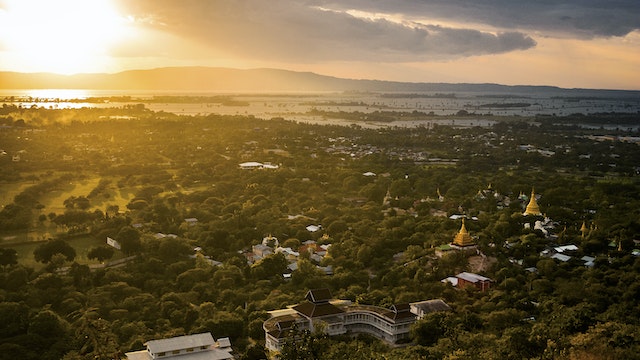 To get a sense of Mandalay’s pancake-flat sprawl, climb the 760ft hill that breaks it. The walk up covered stairways on the hill's southern slope is a major part of the experience – note that you'll need to go barefoot in places, as you pass through numerous temples and pagodas. The climb takes 30 minutes, but much longer if you allow for stops en route. The summit viewpoint is especially popular at sunset, when young monks converge on foreigners for language practice.

There are two southern stairways. The most obvious starts between two giant chinthe (half-lion, half-dragon guardian deities), with 1729 steps. There's an alternative southeastern stairway that's more interesting for glimpsed views, but harder on the feet. The two routes converge, then climb to a shrine building containing a large standing buddha, whose outstretched arm points towards the royal palace. This evokes the legend in which the historical Buddha supposedly visited Burma, accompanied by his disciple Ananda, and on climbing Mandalay Hill prophesied that a great city would be founded below after 2400 years. Scholars calculated that to mean 1857, the year that King Mindon did indeed decree the capital’s move from Amarapura to Mandalay.

Further up, behind the forgettable Myatsawnyinaung Ordination Hall, are the windowless ruins of a three-storey stone fortress retaken from the Japanese by Britain’s Royal Berkshire Regiment in a battle in 1945.

Near the summit, on the eastern side, facing the penultimate stupa, a contemporary statue depicts ogress San Dha Mukhi offering forth her severed breasts. That’s the sort of display that might have alarmed the more squeamish, but according to legend her feat of self-mutilation impressed the Buddha so much that he ensured her reincarnation 2400 years later as King Mindon.

Mandalay Hill St, the winding one-way road for vehicles that begins at the corner of 10th and 68th Sts, is busy with locals jogging, walking and riding bikes up the steep switchbacks in the late afternoon.

Steeper stairways lead up from the north (in 25 minutes) or west (15 minutes), but there's little to see en route apart from canoodling couples (north) or lounging monks (west). Wear shoes for these stairways and, near the top of the northern route, be prepared to clamber across and between a trio of pipes.

It's possible to drive most of the way up Mandalay Hill. From the upper car park, both a lift and an escalator tower should be able to whisk you up to the hilltop. However, as both are often broken you'll probably need to walk the last five minutes on stairways. From 10th St at 68th St, shared pick-up route 16 (per person K1000) shuttles to the car park. Motorcycle taxis typically charge K3000 up and K2000 down (even though the down route is much further due to a long one-way loop).