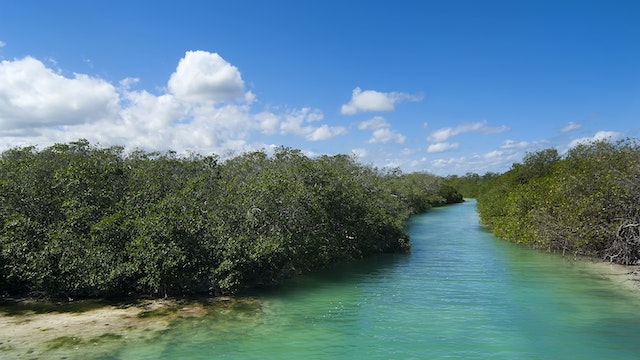 While floating down a canal that Mayans dug by hand centuries ago, you see tall grasses on either side and colorful birds flying overhead. You hear the haunting call of a howler monkey in the distance, like you’re a thousand miles from civilization. This is Sian Ka’an Biosphere Reserve, the largest protected area on Mexico’s Caribbean coast, and home to endangered creatures and some of the Yucatán’s most sublime landscapes. A visit here, just south of Tulum, offers a window into the world beyond all-inclusive resorts and glittery nightclubs.

The name Sian Ka’an – Yucatec Maya for "where the sky is born" – perfectly captures the magnificence of this 1.3 million acre reserve. Sian Ka’an is one of the most biodiverse places in the world, composed of a delicate balance of ecosystems: tropical forests and coral reefs, mangroves and savannahs, impossibly blue lagoons and miles and miles of untouched beaches. It is also one of the few places in the world where petenes (tree islands that form in swamps) thrive and cenotes (freshwater sinkholes) are found. Sian Ka’an is home to a brilliant diversity of fauna too: spider monkeys, howler monkeys, American crocodiles, jaguars, pumas, Central American tapirs, four sea turtle species, giant land crabs, more than 330 bird species (including roseate spoonbills and flamingos), manatees, dolphins and some 400 fish species.

Sian Ka’an was inhabited by ancient Maya peoples for over 1200 years, its waterways forming an important trade route between the coastal city of Tulum and the interior. Twenty-three known archaeological sites exist in the reserve, the earliest dating to 350 BC. By the mid-1500s, the Maya abandoned Sian Ka’an for reasons unknown. The region remained largely untouched until the early 1900s when a railway line was built through the southern end of Sian Ka’an, connecting the port of Vigía Chico to present-day Felipe Carrillo Puerto. The train was initially built to support the Mexican military during the Caste War; later it was used to transport chicle harvested in the region. (It was used for just 27 years; vestiges of the original tracks can still be seen today.)  Sian Ka’an was protected as a biosphere reserve in 1986, when the Mexican government recognized that uncontrolled development – mostly land clearing for cattle pastures and timber extraction – would have a devastating effect on the region.  A year later, it was named a UNESCO World Heritage site for its exceptional biodiversity and its vast wetlands. Today, more than half of Sian Ka’an is off limits except for scientific research. The rest is reserved for sustainable development and low-impact activities like ecotourism. Only 2000 people live in Sian Ka’an, mostly in fishing villages.

Sian Ka’an is best explored with a guide, as there are few trails and navigating the waterways on your own can be difficult. Several regional tour operators offer excursions into the reserve including birdwatching tours and kayaking through lagoons, visiting Maya ruins, swimming in ancient canals and snorkeling along the Mesoamerican Barrier Reef.

Full-service excursions typically include door-to-door transportation and snacks but can be pricey, running around $85-$165 per person for a half-day trip from Tulum. Maya-run Community Tours Sian Ka'an is a good option that directly benefits the local community.

If you’re on a budget, local boatmen offer lagoon and canal tours from Laguna Muyil near Hwy 307. Tours (8am-4pm daily) last 2½ hours and cost $35-$50 per person, depending on the number of people in the boat. The dock is at the end of a short dirt road, just south of the Muyil Ruins (aka Chunyaxché Ruins). Alternatively, visit the ruins (M$45 or about $2) and take a 500-meter boardwalk trail (M$50 or about $2.50) from the east side of the site to the lagoon.

If you have a rental car, you also can make the trek to Punta Allen – a fishing village at the end of Sian Ka’an’s coastal road. From here, Cooperativa Punta Allen runs various excursions ($150 per boat) including dolphin- and turtle-watching tours and snorkeling. Fly-fishing tours ($300 per boat) also offered. While possible to do as a day trip, an overnight stay makes the trip easier and more enjoyable.

Most people visit Sian Ka’an as a day trip from Tulum, which has a variety of accommodations and restaurants. Inside the reserve, Punta Allen has a handful of simple hotels and restaurants (note: there’s no cell service, and electricity runs only a few hours each day); a few higher-end fishing lodges and rental homes also are along the coastal road.

Getting there and other practicalities

There are two main entrances to Sian Ka’an. The most popular follows the coastline, south from Tulum’s beach road. A huge arch marks the reserve’s entrance where admission (M$37 or about $1.80) is collected and registration required. From the arch, a rutted dirt road runs through the reserve, occasional openings in the palm forest leading to gloriously empty beaches and peeks of turquoise lagoons. The road ends at the village of Punta Allen – a bumpy 35-mile ride that takes about 2 to 3 hours, longer after a heavy rain. Public transportation along this road is sporadic, so joining a tour or driving a rental (four-wheel drive is helpful) are your best options.

A second, lesser known, entrance to Sian Ka’an is next to Muyil Ruins (aka Chunyaxché Ruins). Several buses (M$28 or about $1.40) make the 20-minute trip from Tulum to Muyil each day. From there, you can either enter the reserve via the archaeological site or walk down a short dirt road less than a quarter mile (250m) south of the ruins (look for it near an Oxxo minimart). Both lead to Muyil lagoon where you can take boat trips through the northwestern tip of the reserve.