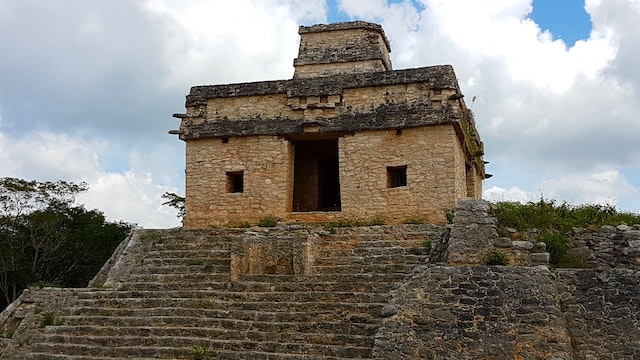 Lying about 17km due north of central Mérida, Dzibilchaltún ('Place of Inscribed Flat Stones') was the longest continuously used Maya administrative and ceremonial city, serving from around 1500 BC until the European conquest in the 1540s. At the height of its greatness, Dzibilchaltún covered 15 sq km. Some 8400 structures were mapped by archaeologists in the 1960s and only few of these have been excavated. Aside from the ruins, the site offers a lovely, swimmable cenote and a Maya museum.

Enter the site along a nature trail that terminates at the modern, air-conditioned Museo del Pueblo Maya, featuring artifacts from throughout the Maya regions of Mexico, including some superb colonial-era religious carvings and other pieces. Exhibits explaining both ancient and modern Maya daily life are labeled in Spanish and English. Beyond the museum, a path leads to the central plaza, where you’ll find an open chapel that dates from early Spanish times (1590–1600).

In some ways the site might feel a little unimpressive if you’ve already seen larger places, but twice a year humble Dzibilchaltún truly shines, in some ways even more than Chichén Itzá; at sunrise on the equinoxes (approximately March 20 and September 22), the sun aligns directly with the main door of the Templo de las Siete Muñecas (Temple of the Seven Dolls), which got its name from seven grotesque dolls discovered here during excavations. As the sun rises, the temple doors glow, then ‘light up’ as the sun passes behind. It also casts a cool square beam on the crumbled wall behind. Many who have seen both feel the sunrise here is more spectacular than Chichén Itzá’s famous snake, and is well worth getting up at the crack of dawn to witness.

Within the site, the Cenote Xlacah is more than 40m deep and a fine spot for a swim after exploring the ruins. In 1958 a National Geographic Society diving expedition recovered more than 30,000 Maya artifacts, many of ritual significance, from the cenote. The most interesting of these are now on display in the site’s museum. South of the cenote is Estructura 44 – at 130m it’s one of the longest Maya structures in existence. Note that for some reason you're not allowed to bring backpacks into the ruins, so plan accordingly.

Chablekal-bound colectivos depart frequently from Calle 58 (between Calles 57 and 59) in Mérida. They'll drop you about 300m from the site's entrance.