Kabah is one of the few Maya settlements in the area that has retained its original name (meaning 'the powerful hand'). Second only to Uxmal in the Puuc Region, this is a hugely impressive sight, spread out on both sides of the main road, though at present only one side of the complex is open to the public. The site was occupied in the 3rd century BC, but most of the structures standing today date from 7th–11th centuries.

Upon entering the site, head to the right and climb the stairs of El Palacio de los Mascarones (Palace of the Masks). Standing in front of it is the Altar de los Glifos, whose immediate area is littered with many stones carved with glyphs. The palace’s facade is an amazing sight, covered in nearly 300 masks of Chaac, the rain god or sky serpent. Most of their huge noses are broken off; the best intact beaks are at the building's south end.

These curled-up noses may have given the palace its modern Maya name, Codz Poop (Rolled Mat; it’s pronounced like ‘Codes Pope’). When you’ve had your fill of noses, head north and around to the back of the Poop to check out the two restored atlantes (male figures used as supporting columns). These are especially interesting, as they’re some of the very few 3D human figures you’ll see at the main Maya sites. One is headless and the other wears a jaguar mask atop his head.

Descend the steps near the atlantes and turn left, passing the small Pirámide de los Mascarones, to reach the plaza containing El Palacio. The palace’s broad facade has several doorways, two of which have a column in the center. These columned doorways and the groups of decorative columnillas (little columns) on the upper part of the facade are characteristic of the Puuc architectural style.

Steps on the north side of El Palacio’s plaza put you on a path leading about 200m through the jungle to the Templo de las Columnas, which has more rows of decorative columns on the upper part of its facade. At last visit, access to the temple was closed for restoration.

West of El Palacio, across the highway, a path leads up the slope and passes to the south of a high mound of stones that was once the Gran Pirámide (Great Pyramid). The path curves to the right and comes to a large restored monumental arch. It’s said that the sacbé, or cobbled and elevated ceremonial road, leading from here goes through the jungle all the way to Uxmal, terminating at a smaller arch; in the other direction it goes to Labná. Once, all of the Yucatán Peninsula was connected by these marvelous ‘white roads’ of rough limestone.

At present nothing of the sacbé is visible, and the rest of the area west of the highway is a maze of unmarked, overgrown paths leading off into the jungle.

Kabah is 104km from Mérida. It's easiest to reach the site by car, or from Mérida you can take a Sur bus (five daily). 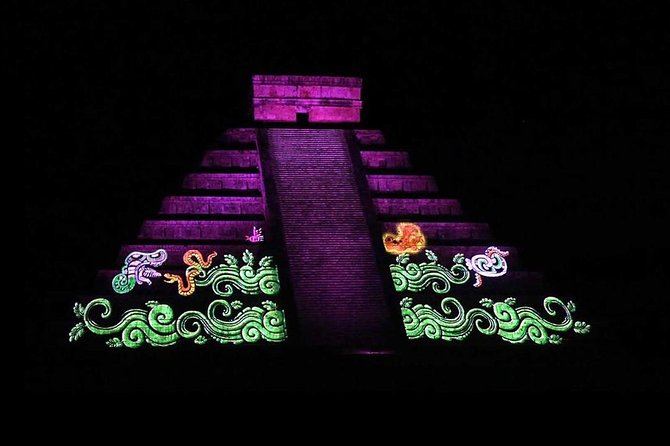