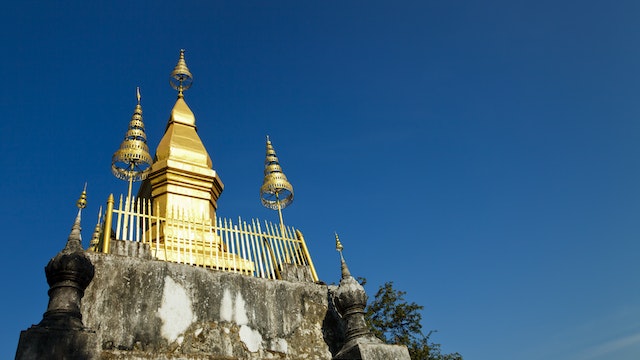 Dominating the old city centre and a favourite with sunset junkies, the 100m-tall Phu Si (prepare your legs for a steep 329-step ascent) is crowned by a 24m gilded stupa called That Chomsi. Viewed from a distance, especially when floodlit at night, the structure seems to float in the hazy air like a chandelier. From the summit, however, the main attraction is the city views.

Beside a flagpole on the same summit there's a small remnant anti-aircraft cannon left from the war years.

Ascending Phu Si from the northern side, stop at Wat Pa Huak. The gilded, carved front doors are usually locked, but an attendant will open them for a tip. Inside, the original 19th-century murals show historic scenes along the Mekong River, including visits by Chinese diplomats and warriors arriving by river, and horse caravans.

Reaching That Chomsi is also possible from the southern and eastern sides. Two such paths climb through large Wat Siphoutthabat Thippharam to a curious miniature shrine that protects a Buddha Footprint. If this really is his rocky imprint, then the Buddha must have been the size of a brontosaurus. Directly southwest of here a series of gilded Buddhas are nestled into rocky clefts and niches around Wat Thammothayalan; this monastery is free to visit if you don't climb beyond to That Chomsi.