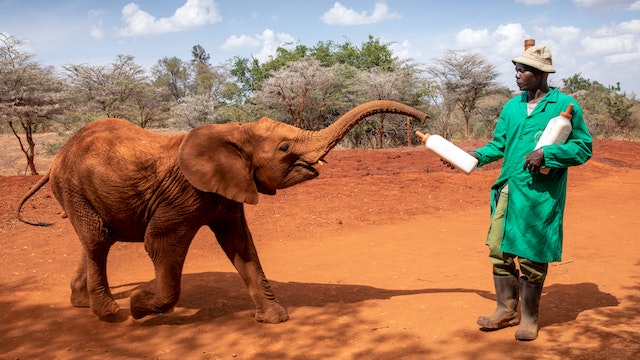 Occupying a plot within Nairobi National Park, this nonprofit trust was established in 1977, shortly after the death of David Sheldrick, who served as the antipoaching warden of Tsavo National Park. Together with his wife, Daphne, David pioneered techniques for raising orphaned black rhinos and elephants and reintroducing them into the wild, and the trust retains close links with Tsavo for these and other projects. The centre is one of Nairobi's most popular attractions, and deservedly so.

After entering at 11am, visitors are escorted to a small viewing area centred on a muddy watering hole. A few moments later, much like a sports team marching out onto the field, the animal handlers come in alongside a dozen or so baby elephants. For the first part of the viewing, the handlers bottle-feed the baby elephants – a heartwarming sight.

Once the little guys and girls have drunk their fill, they proceed to romp around like toddlers. The elephants seem to take joy in misbehaving in front of their masters, so don’t be surprised if a few break rank and start rubbing up against your leg! The baby elephants also use this designated time slot for their daily mud bath, which makes for some great photos; keep your guard up, as they’ve been known to spray a tourist or two with a trunkful of mud.

While the elephants gambol, the keepers talk about the individual orphans and their stories. Explanations are also given about the broader picture of the orphans project and some of the other projects in which the trust is involved. There's also the opportunity to 'adopt' one of the elephants. For those who do, there's a chance to visit when your elephant returns to the stockades around 5pm every evening – advance bookings essential.

The trust is also home to a number of orphaned rhinos, many of which, like the baby elephants, mingle with wild herds in Nairobi National Park during the day. One exception is Maxwell, a blind rhino who lives in a large stockade for his protection.

To get here by bus or matatu, take 125 or 126 from Moi Ave and ask to be dropped off at the KWS central workshop on Magadi Rd (KSh80, 50 minutes). It’s about 1km from the workshop gate to the Sheldrick centre – it’s signposted and KWS staff can give you directions. Be advised that at this point you’ll be walking in the national park, which does contain predators, so stick to the paths. A taxi from the city centre should cost between KSh1500 and KSh2000.