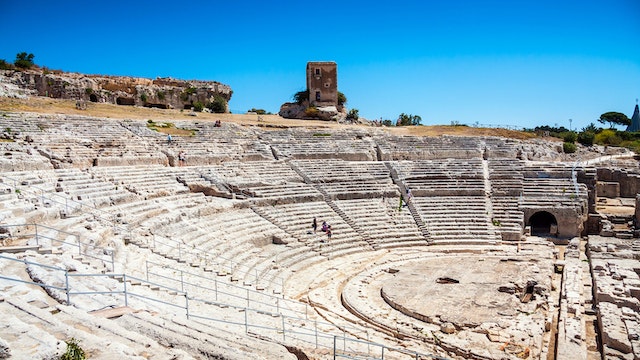 For the classicist, Syracuse's real attraction is this archaeological park, home to the pearly Teatro Greco. Constructed in the 5th century BC and rebuilt in the 3rd century, the 16,000-capacity amphitheatre staged the last tragedies of Aeschylus (including The Persians), first performed here in his presence. From early May to early July it's brought to life with an annual season of classical theatre.

Beside the theatre is the mysterious Latomia del Paradiso, a deep, precipitous limestone quarry out of which stone for the ancient city was extracted. Riddled with catacombs and filled with citrus and magnolia trees, it's also where the 7000 survivors of the war between Syracuse and Athens in 413 BC were imprisoned. The Orecchio di Dionisio, a 23m-high grotto extending 65m back into the cliffside, was named by Caravaggio after the tyrant Dionysius, who is said to have used the almost perfect acoustics of the quarry to eavesdrop on his prisoners.

Back outside this area you'll find the entrance to the 2nd-century Anfiteatro Romano, originally used for gladiatorial combats and horse races. The Spaniards, little interested in archaeology, largely destroyed the site in the 16th century, using it as a quarry to build Ortygia's city walls. West of the amphitheatre is the 3rd-century-BC Ara di Gerone II, a monolithic sacrificial altar to Hieron II, where up to 450 oxen could be killed at one time.

To reach the park, take Sd'A Trasporti minibus 2 (€1, 15 minutes) from Molo Sant'Antonio, on the west side of the main bridge into Ortygia; purchase tickets on-board. Alternatively, walking from Ortygia will take about 30 minutes. If driving, there is limited free parking on Viale Augusto.

There are two ticket offices: one office is located near the corner of Via Cavallari and Viale Augusto, opposite the main site, while the second outlet is located down the path leading to the actual ruins. Those wanting a break will find a cafe between the second ticket office and the Anfiteatro Romano.