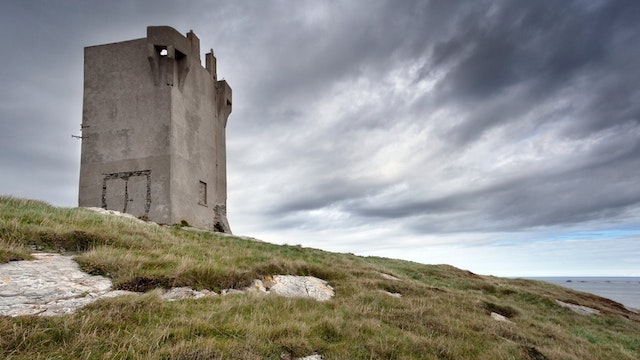 On the northernmost tip of Malin Head, called Banba's Crown, stands a cumbersome 1805 clifftop tower that was built by the British admiralty and later used as a Lloyds signal station. Around it are concrete huts that were used by the Irish army in WWII as lookout posts. To the west from the fort-side car park, a path leads 700m to Hell's Hole, a chasm where the incoming waters crash against the rock forms.

The view to the west takes in, from left to right, the Inishowen Hills, Dunaff Head, low-lying Fanad Head with its lighthouse, the twin 'horns' of Horn Head and the twin bumps of Tory Island; in the far distance, to the left of Fanad lighthouse, are Muckish and Errigal Mountains. To the east lie raised beach terraces, and offshore you can see the lighthouse on the remote island of Inishtrahull. A viewing area has coin-operated telescopes. On a few nights a year you can even see the Northern Lights.

Watch for the truck-based Caffe Banba that is sometimes in the car park selling superb coffees and baked goods. The car park itself can get quickly crowded with cars during the busy season.