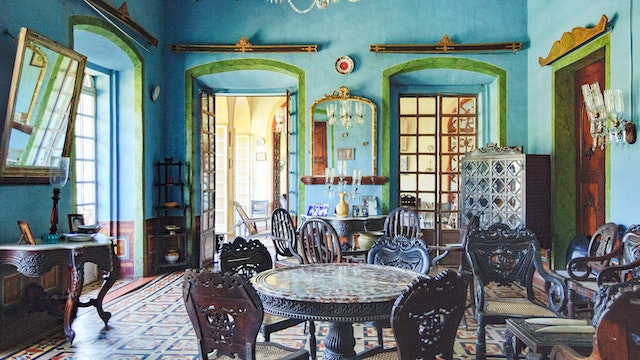 Braganza House, built in the 17th century and stretching along one whole side of Chandor’s village square, is the biggest Portuguese mansion of its kind in Goa and the best example of what Goa’s scores of once-grand and glorious mansions have today become. Granted the land by the King of Portugal, the Braganza family built this oversized house, which was later divided into the east and west wings when it was inherited by two sisters from the family.

Both sides are open to the public daily. There are no set tour times, but if you enter either side a family member or representative should give you a guided tour and regale you with a few stories of the lifestyles of the landed gentry during Goa’s years of Portuguese rule. The entry fee at each side is a suggested donation and goes towards the considerable upkeep of the homes, which receive no official funding.

The West Wing belongs to one set of the family’s descendants, the Menezes-Braganças. It’s well maintained and more like a museum than a home, filled with gorgeous Belgian glass chandeliers, Italian marble floors and antique treasures from Macau, Portugal, China and Europe. Also here is the extensive library of Dr Luís de Menezes Bragança, a noted journalist and leading light in the Goan Independence movement. No photography.

Next door, the East Wing is owned by the Pereira-Braganza family, descendants of the other half of the family. It’s not as grand and well-maintained as its counterpart but is beautiful in its own lived-in way and is also crammed with antiques and collectables from around the world. It features a large ballroom with marble floor, but the high point is the small family chapel, which contains a carefully hidden fingernail of St Francis Xavier.