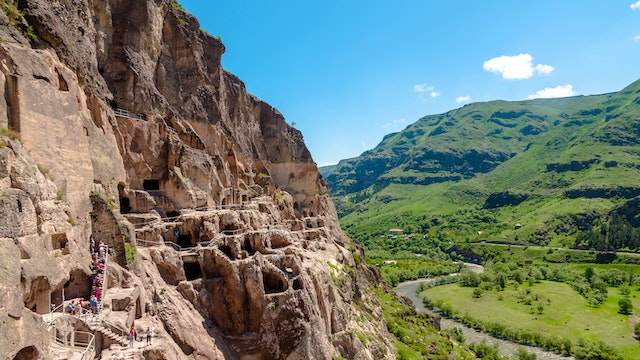 The remarkable cave city of Vardzia is both a cultural symbol and a spectacular natural phenomenon with a special place in Georgian hearts. King Giorgi III built a fortification here in the 12th century, and his daughter, Queen Tamar, established a cave monastery that grew into a holy city housing perhaps 2000 monks, renowned as a spiritual bastion of Christendom’s eastern frontier. Altogether there are over 400 rooms, 13 churches and 25 wine cellars, with many more still being discovered today.

Its inhabitants lived in rock-hewn dwellings ranging over 13 floors, a scale almost impossible to imagine at the time. A major earthquake in 1283 shook away the outer walls of many caves and the cave city began its long decline. In 1551 the Georgians were defeated by the Persians in a battle in the caves themselves, and Vardzia was looted. Since the end of Soviet rule Vardzia has again become a working monastery, with some caves inhabited by monks (and cordoned off to protect their privacy).

Guides, available at the ticket office, don’t speak English but they have keys to some passages and caves that you can’t otherwise enter.

At the heart of the cave complex is the Church of the Assumption, with its two-arched, bell-hung portico. The church's facade has gone, but the inside is beautiful. Frescoes painted at the time of its construction (1184–86) portray many New Testament scenes and, on the north wall, Giorgi III and Tamar before she married (shown by the fact that she is not wearing a wimple). To be allowed in the church, women must wear long skirts and a head covering, and men must wear long trousers. The door to the left of the church door leads into a long tunnel (perhaps 150m), which climbs up steps inside the rock and emerges well above the church, a claustrophobic but rather exciting experience.You can't really get lost despite the size of the complex, and once you have explored various different levels, you'll find yourself led back down the hillside in a large loop.