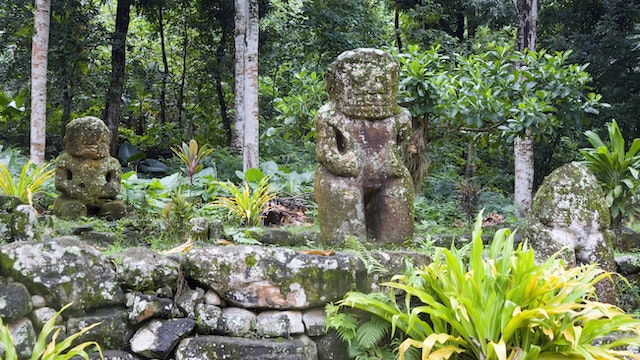 Iipona is one of the best-preserved archaeological sites in French Polynesia. You’ll be moved by its eeriness and impressed by the five monumental tiki – it pulsates with mana.

As you advance towards the first platform, you’ll first notice the reclining Tiki Maki Taua Pepe, representing a woman lying on her stomach, her head stretched out and arms pointing to the sky. Experts believe she represents a woman giving birth. The petroglyphs on the pedestal represent dogs but their meaning is unknown.

Tiki Takaii, at 2.67m, is the largest ancient tiki in French Polynesia; it’s named after a warrior chief renowned for his strength. Tiki Te Tovae E Noho is to the left of Takaii, on a lower platform. Less finely worked than the others, its upper torso is hard to make out and the head has disappeared. Note that its hands each have six fingers. Further back stands Tiki Fau Poe. Measuring about 1.8m, it is sitting with its legs stretched out, a position typical of women when they work in the fields. Experts believe it to be Takaii’s wife. Tiki Manuiotaa is in complete contrast to the others: less massive, its proportions are harmonious and balanced. The hands are clearly recognisable, as is its female sex. It was decapitated, but its head has been replaced by archaeologists.

Known to ethnologists and archaeologists in the 1800s, the Iipona site was extensively restored in 1991 by French archaeologists Pierre and Marie-Noëlle Garanger-Ottino.

To reach the site from Puamau, follow the track directly back from the seafront, next to the football ground, and continue for about 1.5km. You will need to pay 300 CFP to the person who maintains and guards the site.