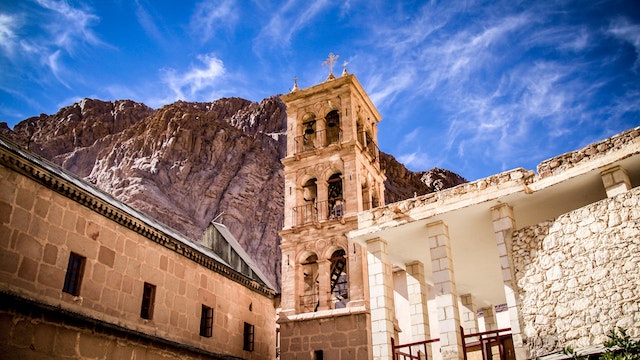 This ancient monastery traces its founding to about AD 330, when Byzantine empress Helena had a small chapel and a fortified refuge for local hermits built beside what was believed to be the burning bush from which God spoke to Moses. Today St Catherine’s is considered one of the oldest continually functioning monastic communities in the world. If the monastery museum is locked, ask at the Church of the Transfiguration for the key.

The monastery – which, together with the surrounding area, has been declared a Unesco World Heritage site – is named after St Catherine, the legendary martyr of Alexandria, who was tortured on a spiked wheel and then beheaded for her faith. Tradition holds that her body was transported by angels away from the torture device (which spun out of control and killed the pagan onlookers) and onto the slopes of Egypt’s highest mountain peak. The peak, which lies about 6km south of Mt Sinai, subsequently became known as Gebel Katarina. Katherine’s body was ‘found’ about 300 years later by monks from the monastery in a state of perfect preservation.

In the 6th century, Emperor Justinian ordered a fortress to be constructed around the original chapel, together with a basilica and a monastery, to provide a secure home for the monastic community that had grown there, and as a refuge for the Christians of southern Sinai.

Since then the monastery has been visited by pilgrims from throughout the world, many of whom braved extraordinarily difficult and dangerous journeys to reach the remote and isolated site. Today a paved access road has removed the hazards that used to accompany a trip here, and the monastery has become a popular day trip from Sharm El Sheikh and Dahab.

Travellers visiting should remember that this is still a functioning monastery, which necessitates conservative dress – no one with shorts is permitted to enter, and women must cover their shoulders.

Inside the walled compound, the ornately decorated 6th-century Church of the Transfiguration has a nave flanked by massive marble columns and walls covered in richly gilded icons and paintings. At the church’s eastern end, a gilded 17th-century iconostasis separates the nave from the sanctuary and the apse, where St Catherine’s remains are interred (off limits to most visitors). High in the apse above the altar is one of the monastery’s most stunning artistic treasures, the 6th-century mosaic of the Transfiguration, although it can be difficult to see it past the chandeliers and the iconostasis. To the left of and below the altar is the monastery’s holiest area, the Chapel of the Burning Bush, which is off limits to the public.

It’s possible to see what is thought to be a descendant of the original burning bush in the monastery compound; however, due to visitors snipping cuttings of the bush to take home as blessings, the area surrounding it is now fenced off. Near the burning bush is the Well of Moses, a natural spring that is supposed to give marital happiness to those who drink from it.

Above the Well of Moses, and the main highlight of a monastery visit, is the superb Monastery Museum, which has been magnificently restored. It has displays (labelled in Arabic and English) of many of the monastery’s artistic treasures, including some of the spectacular Byzantine-era icons from its world-famous collection. There are numerous precious chalices, and gold and silver crosses, along with displays of ancient manuscripts. In the lowest room of the museum is the prize exhibit: parchments from the Codex Sinaiticus, the world's oldest near-complete bible.

The monastery’s library, the second largest in the world, contains a priceless collection of illuminated bibles and ancient manuscripts, including a hand-written copy of the New Testament, and has reopened to the public after three years of restoration.

Just inside the monastery walls you'll find a gift shop selling replicas of icons. In the wider monastery grounds, outside the thick walls, are the guest house and a lovely courtyard area with a cafe (though it was closed during our last visit due to lack of custom). As tourism numbers are down, the narrow lane inside the monastery is pleasantly crowd-free but when tourism picks up again be aware that the monastery can get crammed with tour-bus crowds, particularly on Saturdays and Mondays.