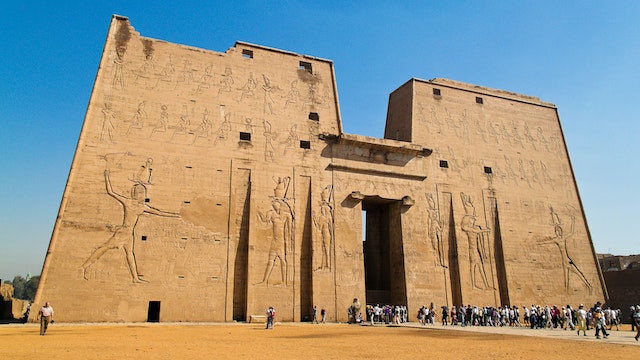 This Ptolemaic temple, built between 237 and 57 BC, is one of the best-preserved ancient monuments in Egypt. Preserved by desert sand, which filled the place after the pagan cult was banned, the temple is dedicated to Horus, the avenging son of Isis and Osiris. With its roof intact, it is also one of the most atmospheric of ancient buildings.

Edfu was a settlement and cemetery site from around 3000 BC onward. It was the 'home' and cult centre of the falcon god Horus of Behdet (the ancient name for Edfu), although the Temple of Horus as it exists today is Ptolemaic. Started by Ptolemy III (246–221 BC) on 23 August 237 BC, on the site of an earlier and smaller New Kingdom structure, the sandstone temple was completed some 180 years later by Ptolemy XII Neos Dionysos, Cleopatra VII’s father. In conception and design it follows the general plan, scale, ornamentation and traditions of Pharaonic architecture, right down to the Egyptian attire worn by Greek pharaohs depicted in the temple’s reliefs. Although it is much newer than cult temples at Luxor or Abydos, its excellent state of preservation helps to fill in many historical gaps; it is, in effect, a 2000-year-old example of an architectural style that was already archaic during Ptolemaic times.

Two hundred years ago the temple was buried by sand, rubble and part of the village of Edfu, which had spread over the roof. Excavation was begun by Auguste Mariette in the mid-19th century. Today the temple is entered via a long row of shops selling tourist tat, and a new visitors centre that houses the ticket office, clean toilets, a cafeteria and a room for showing a 15-minute film on the history of the temple in English.

Beyond the Roman mammisi (birth house), with some colourful carvings, the massive 36m-high pylon (gateway) is guarded by two huge but splendid granite statues of Horus as a falcon. The walls are decorated with colossal reliefs of Ptolemy XII Neos Dionysos, who is holding his enemies by their hair before Horus and is about to smash their skulls; this is the classic propaganda pose of the almighty pharaoh.

Beyond this pylon, the court of offerings is surrounded on three sides by 32 columns, each with different floral capitals. The walls are decorated with reliefs, including the ‘Feast of the Beautiful Meeting’ just inside the entrance, the meeting being that of Horus of Edfu and Hathor of Dendara, who visited each other’s temples each year and, after two weeks of great fertility celebrations, were magically united.

A second set of Horus falcon statues in black granite once flanked the entrance to the temple’s first or outer hypostyle hall, but today only one remains. Inside the entrance of the outer hypostyle hall, to the left and right, are two small chambers: the one on the right was the temple library where the ritual texts were stored; the chamber on the left was the hall of consecrations, a vestry where freshly laundered robes and ritual vases were kept. The hall itself has 12 columns, and the walls are decorated with reliefs of the temple’s founding.

The inner hypostyle hall also has 12 columns, and in the top left part of the hall is perhaps this temple’s most interesting room: the temple laboratory. Here, all the necessary perfumes and incense recipes were carefully brewed and stored, their ingredients listed on the walls.

Exit the inner hypostyle hall through the large central doorway to enter the offering chamber, or first antechamber, which has an altar where daily offerings of fruit, flowers, wine, milk and other foods were left. On the west side, 242 steps lead up to the rooftop and its fantastic view of the Nile and the surrounding fields. (The roof is closed to visitors.)

The second antechamber gives access to the sanctuary of Horus, which contains the polished-granite shrine that once housed the gold cult statue of Horus. Created during the reign of Nectanebo II (360–343 BC), this shrine, or house of the god, was reused by the Ptolemies in their newer temple. In front of it stands a replica of the wooden barque (boat) in which Horus’ statue would be taken out of the temple in procession during festive occasions: the original is now in the Louvre, Paris.

On the eastern enclosure wall, look for the remains of the Nilometer, which measured the level of the river and helped predict the coming harvest.