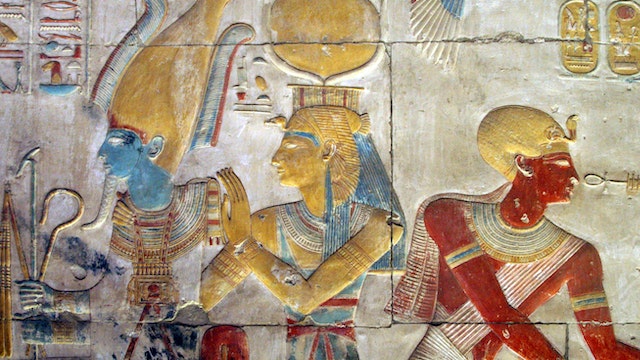 The first structure you’ll see at Abydos is the Great Temple of Seti I, which, after a certain amount of restoration work, is one of the most complete, unique and beautiful temples in Egypt. With exquisite decoration and plenty of atmosphere, it is the main attraction here, although the nearby Osireion is also wrapped in mystery and the desert views are spectacular.

This great limestone structure, unusually L-shaped rather than rectangular, had seven great doorways and was dedicated to the six major gods – Osiris, Isis, Horus, Amun-Ra, Ra-Horakhty and Ptah – and also to Seti I (1294–1279 BC) himself. Less than 50 years after the end of the Amarna 'heresy' – when Pharaoh Akhenaten broke with tradition by creating a new religion, capital and artistic style – this is a clear attempt to revive the old ways. As you roam through Seti’s dark halls and sanctuaries, an air of mystery surrounds you.

The temple is entered through a largely destroyed pylon and two open courtyards, built by Seti I’s son Ramses II, who is depicted on the portico killing Asiatics and worshipping Osiris. Beyond, originally with seven doorways but now only entered through the central one, is the first hypostyle hall, also completed by Ramses II. Reliefs depict the pharaoh making offerings to the gods and preparing the temple building.

The second hypostyle hall, with 24 sandstone papyrus columns, was the last part of the temple to have been decorated by Seti, who died before the work was completed. The reliefs here are of the highest quality and hark back to the finest Old Kingdom work. Particularly outstanding is a scene on the rear right-hand wall showing Seti standing in front of a shrine to Osiris, upon which sits the god himself. Standing in front of him are the goddesses Maat, Renpet, Isis, Nephthys and Amentet. Below is a frieze of Hapi, the Nile god.

At the rear of this second hypostyle hall are sanctuaries for each of the seven gods (right to left: Horus, Isis, Osiris, Amun-Ra, Ra-Horakhty, Ptah and the deified Seti), which once held their cult statues. The Osiris sanctuary, third from the right, leads to a series of inner chambers dedicated to the god, his wife and child, Isis and Horus, and the ever-present Seti. More interesting are the chambers off to the left of the seven sanctuaries: here, in a group of chambers dedicated to the mysteries of Osiris, the god is shown mummified with the goddess Isis hovering above him as a bird, a graphic scene which records the conception of their son Horus.

Immediately to the left of this is the corridor known as Gallery of the Kings, carved with the figures of Seti I, his eldest son the future Ramses II, and a long list of the pharaohs who preceded them. The stairway leads out to the Osireion and the desert beyond.

One of the temple’s most recent residents was Dorothy Eady. An Englishwoman better known as ‘Omm Sety’, Eady believed she was a reincarnated temple priestess and lover of Seti I. For 35 years she lived at Abydos and provided archaeologists with information about the workings of the temple, in which she was given permission to perform the ancient rites. She died in 1981 and is buried in the desert.