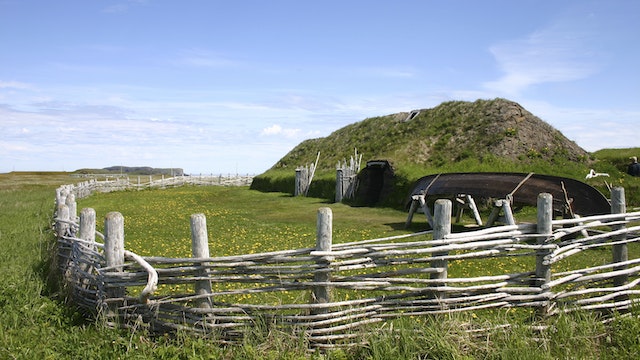 Leif Erikson and his Viking friends lived here circa 1000. Visitors can see the remains of their waterside settlement: eight wood-and-sod buildings, now just vague outlines left in the spongy ground, plus three replica buildings inhabited by costumed docents. The latter have names such as 'Thora' and 'Bjorn' and simulate Viking chores such as spinning fleece and forging nails. Allow two or three hours to walk around and absorb the ambience.

The premise may seem dull – visiting a bog in the middle of nowhere and staring at the spot where a couple of old sod houses once stood – but somehow this site, lying in a forlorn sweep of land, turns out to be one of Newfoundland's most stirring attractions.

Be sure to browse the interpretive center and watch the introductory film, which tells the captivating story of Norwegian explorer Helge Ingstad and his wife, archaeologist Anne Stine, who rediscovered the site in 1960. Also worthwhile is the 3km trail that winds through the barren terrain and along the coast surrounding the interpretive center.