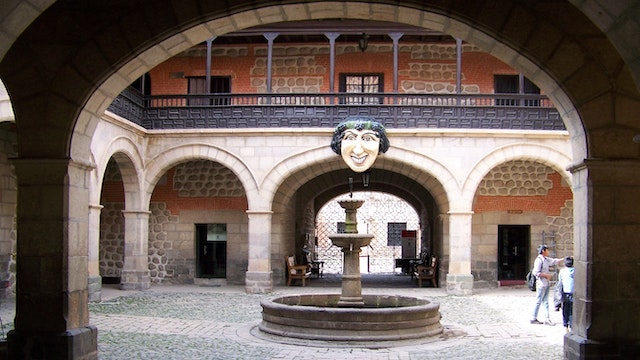 The National Mint is Potosí’s star attraction and one of South America’s finest museums. Potosí’s first mint was constructed on the present site of the Casa de Justicia in 1572 under orders from the Viceroy of Toledo. This, its replacement, is a vast and strikingly beautiful building that takes up a whole city block. You don't have to be a numismatist to find the history of the first global currency fascinating.

The building was built between 1753 and 1773 to control the minting of colonial coins; legend has it that when the king of Spain saw the bill for its construction, he exclaimed ‘that building must be made of silver’ (expletive presumably deleted). These coins, which bore the mint mark ‘P,’ were known as potosís.

The walls are more than a meter thick and, not surprisingly, it has not only functioned as a mint, but also done spells as a prison, a fortress and, during the Chaco War, the headquarters of the Bolivian army. As visitors are ushered into a courtyard from the entrance, they’re greeted by the sight of a stone fountain and a freaky mask of Bacchus, hung there in 1865 by Frenchman Eugenio Martin Moulon for reasons known only to him. In fact, this aberration looks more like an escapee from a children’s funfair, but it has become a town icon (known as the mascarón).

Apart from the beauty of the building itself, there’s a host of historical treasures. They include a fascinating selection of religious paintings from the Potosí school (especially remarkable are those by Melchor Pérez de Holguín), culminating in La Virgen del Cerro, a famous anonymous work from the 18th century, as well as the immense assemblies of mule-driven wooden cogs that served to beat the silver to the width required for the coining. These were replaced by steam-powered machines in the 19th century. The last coins were minted here in 1953; the Bolivian coins you may have used to pay to enter the museum are made in Canada and Chile from cheaper materials like zinc and copper.

The guided tour is long (two hours) and the temperatures inside chilly, so be sure to have a jacket on hand. Although there are English and French tours available on request, the quality of the Spanish one is higher and the visit more comprehensive, so it’s worth doing, even if your language skills aren't quite up to scratch.