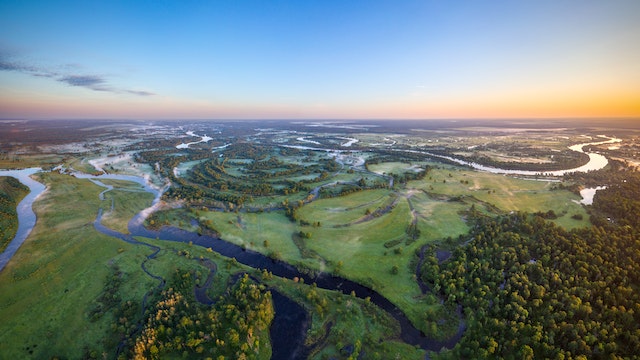 One of the best-kept secrets in Belarus is this relatively untouched swath of marshes, swampland and floodplains emanating from the Pripyat River, about 250km due south of Minsk. The park headquarters are in the village of Lyaskavichy, in a complex that also includes a nature museum and a hotel. Make all your arrangements here. In late August or early September the whole area gets together for good clean country fun at the Polosye Festival in Lyaskavichy.

Known locally as 'the lungs of Europe', the park is a birdwatchers' paradise, with more than 250 avian species, mostly wetland varieties. There are also more than 800 types of plant and some 50 mammal species living in the park, including about 100 European bison.

If you're planning multiple days in the park, you can enjoy forest lodging with guides for birdwatching, fishing, boating or, in the winter, ice-fishing (followed by vodka and a sauna, of course). Figure on BYN75 per person per day for room and board.

If time is short, your best bet is a safari or a river cruise. The two-hour safaris (BYN8 for a public trip or BYN80 for a private trip) run only from September to May, when there is the best chance to spot bison, moose and other mammals; dusk yields the best results. A one-hour river cruise in a speedy aluminium outboard takes you along the Pripyat River and some of its tributaries, with plenty of birds to ogle along the way. These depart from the dock behind the Lyaskavichi Hotel and cost BYN50 for up to four people.

Bicycle rides are possible with free bike hire from the hotels, although there aren't many navigable trails in the Lyaskavichy area. For forest biking or hiking, you're best off in the park's former headquarters, Turau, some 50km west (hire bikes and guides in Lyaskavichy before you head there).

To get to Lyaskavichy from Minsk, take a marshrutka from the Central Bus Station to Zhytkavichy (BYN12, 3½ hours, six daily), then take a taxi (BYN15, 20 minutes) to the park headquarters. From points east or west, jump off the Homel–Brest train in Zhytkavichy.