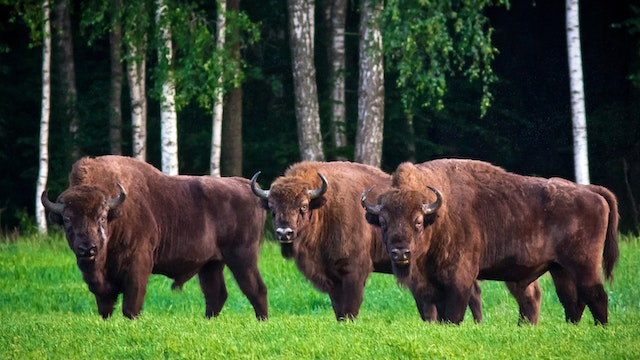 Unesco World Heritage Site Belavezhskaya Pushcha National Park is the oldest wildlife refuge in Europe and the pride of Belarus. At the National Park headquarters in Kamyanyuki, 55km north of Brest, you can arrange to tour the park by bus, bicycle or private car, and you can spend the night at one of several comfortable hotels near the park entrance.

Some 1300 sq km of primeval forest survives in Belavezhskaya Pushcha National Park, half of which lies in Poland. This is all that remains of a canopy that eight centuries ago covered northern Europe. At least 55 mammal species, including deer, lynx, boar, wild horse, wolf, elk, ermine, badger, marten, otter, mink and beaver call this park home, but the area is most celebrated for its 300 or so European bison, the continent's largest land mammal. These free-range zubr – slightly smaller than their American cousins – were driven to near extinction (the last wild bison was shot by a hunter in 1919) then bred back from just 12 out of 52 surviving animals. Now about 5000 zubr exist, of which more than 300 are wild in this park.

You have a chance to spot these beasts in the wild on a tour of the park, although you have to be a bit lucky. The October-to-April period offers the best odds. Volerei (enclosures; admission BYN2.50) near the entrance contain bison as well as deer, boar, elk, ostrich and other animals – including the rare hybrid Tarpan horse, a cross-breed of a species that was also shot into near extinction. Also near the entrance is a nature museum that gives a great introduction to the species living in the park.

The easiest way to tour the park is by taking one of the two daily scheduled bus tours (adult/child BYN10/6, three hours, 11am and 2pm, in Russian only). About half of the tour is spent at a relatively interesting open-air ethnographic museum (free admission) within the park, where you'll sample home-made samahon (moonshine) with salo (cured pork fat). On the way back you'll stop at the 32m tall, 600-year-old Patriarch Oak tree.

A better way to see the park is by hiring a bicycle at the park entrance. There are several sealed bike trails to choose from; the 27km 'big journey' and the 16km 'animal crossing' offer the best chance of spotting wildlife. Bike rental costs BYN9 to BYN15 and child seat's are available for BYN3. Hiking is another option, with several short loops originating at the park entrance. Serious hikers should talk to park staff about longer hikes. Driving your own car in the park costs BYN15 per hour and requires special permission and a park-appointed guide.

The park headquarters runs four hotels near the park entrance, unimaginatively dubbed Hotels No 1, 2, 3 and 4. All have restaurants and there are several additional cafes near the park entrance serving up simple shashlyk (meat kebabs) and bliny (pancakes). Camping in the park requires permission and costs BYN15 per person.

To get to the park from Brest, take a bus or marshrutka (fixed-route minivan) from the bus station (BYN5, 1¼ hours, seven daily). These terminate at the park entrance or at a bus stop nearby in the village of Kamyanyuki. The last trip back to Brest is at 6.40pm from Kamyanyuki. Hiring a taxi to the park should cost about BYN100 round-trip from Brest.

An easier but more expensive option for visiting the park is to book a day trip with an English-speaking guide through a Brest travel agent.