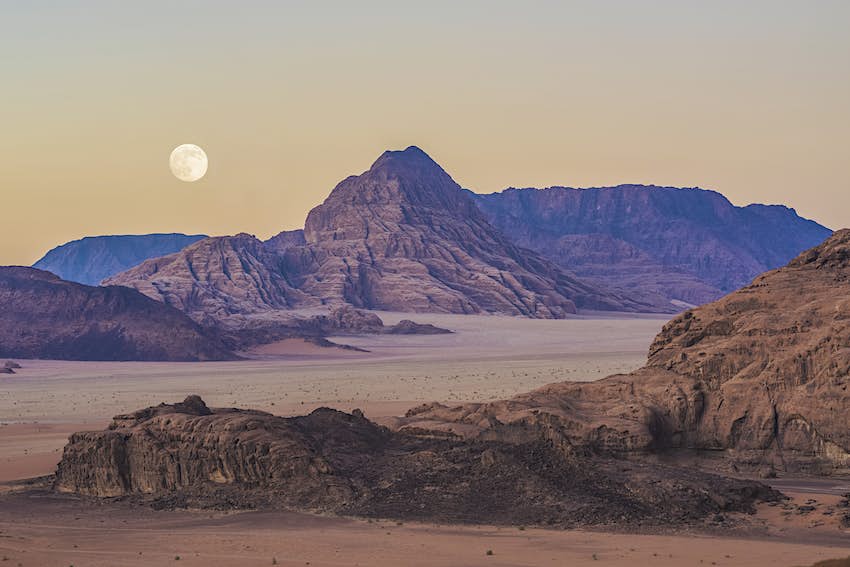 I’m sat cross-legged on a goat skin rug, drinking sage tea brewed from leaves that we foraged a few hours earlier. The fire next to us crackles away as Ali, tall and slender, stirs a huge pot of vegetable stew. It’s swiftly served on a huge communal plate and we eat the traditional way – using our hands and khoubz (middle eastern flat bread) to soak up the delicious juices.

I'm in Wadi Rum, a desert valley in southern Jordan, with my Bedouin guide, Ali. Ali loves telling tales of his life and we gather around whilst gorging on succulent dates. He taught himself English by talking to visitors and “perfected his slang with YouTube,” he says with a smile. The sky bursts into flames from the setting sun over this impressive, unworldly backdrop. Located just a few kilometres from the Saudi border, we are completely isolated in a fortress of pink sandstone mountains and towering, blood-orange sand dunes.

The warm, light breeze caresses my face as the cooler night temperature closes in. This is the magic of the desert that I have read about in books written long before my time.

Editor's note: With travel restrictions and lockdowns in place worldwide, we're highlighting the past trips that have changed us in ways large and small. We hope that these stories inspire you as much as the experiences have inspired us.

A day’s drive into the desert we pass a succession of caves. Ali points to the one that he was born in. At 37 years old he’s spent almost all of his life here. Growing up was challenging.

“We had to move on foot and could not remain in one place for too long because of the lack of food and water for our animals,” he says.

This meant that tribes would have to upheave their life, sometimes as often as every 10 days. Outside the caves were remnants of a tiny settlement; the Bedouins leave the framework of huts to help out the next passersby. I can appreciate their hardship of life in the desert when I look around. In the three days that we spend here, I see barely any evidence of water or vegetation.

There is a strong bond within Ali’s tribe, named Al Zawidah, and he learned his way from his elders.

“They taught us how to interpret the land – how to navigate, where to sleep, how to look after our animals.” I asked him what they would use for medicine. “The women go out in springtime to find certain plants that would be used for ailments such as headaches and stomach problems.”

But ancient traditions still exist. Every two years Ali eats grilled scorpion ground with sugar, which is said to protect a person from its venom. The same with snake – except they boil its head. Just a few years ago Zaid, Ali’s son, had apnea. The elders told Ali to catch a specific lizard, which was then sewn into a muslin pouch and worn around Zaid’s neck. After one week the lizard perished, and Zaid’s breathing difficulties were cured. I ask how this was possible and Ali chuckles that he is still searching for the scientific explanation himself.

Wadi Rum once lay at the bottom of the sea. It has been crisscrossed by caravans on the ancient trading routes and was one of the stages for the Arab Revolt that began in 1916. Petroglyphs reveal nomadic tribes passing through circa 12,000 years ago, and only in the last decade has their way of life really seen change. Searching for a glimpse into this life has led me to Ali, whose family-run business focuses on sharing the depth of the desert.

The word Bedouin is derived from the Arabic word for desert dweller, bedwa. Bedouin must be in Ali’s DNA, for he and the desert are intertwined. I watch him effortlessly glide up steep dunes and jump across crevices like a mountain lion – wearing only a pair of worn out sandals. He creates mouth-watering dishes for five people out of nowhere and provides warmth and entertainment from nothing.

With ancient lands comes ancient customs, and Bedouin hospitality radiates everywhere. The Bedouins will ensure guests eat before they do – even if there is only a little food. A guest can stay up to three days in which time no questions will be asked. Only after three days will the Bedouins ask the guest about their business and intentions.

Their hospitality extends between tribes. “We invite our neighbors to eat with us when they pass by, we respect each other," Ali tells me. "Even our spats are kept between us, they are solved with our own tribal laws.”

We head towards the Northern quarter, an area rarely visited by anyone other than the Bedouins. There are thousands of mountains in Wadi Rum, each of which is named. Ali shows us distinct water markings on some of their faces. “These are very important. It shows where water collects when the rain falls.”

The sea of orange before us is permeated with coral pink, deep red, golden yellow and bright white sands. We bump into the Happy Camel herd, several hundred strong – named because they are free. Although ownerless, they still respond to Ali’s commands. With a click of his mouth and some Arabian yodelling they amble towards our 4x4 in search of sweet treats.

We set up camp for the night away from water sources which Ali said attracts evil spirits in darkness.

“On flat land the winds will whisper any signs of intruders,” he says. A blanket of a million stars appear. Ali points towards Deneb. “This star has been used by ancient explorers to navigate across the Arabian Peninsula for millennia. It is visible from Iraq, across all of Saudi Arabia and up towards Damascus.”

I finally tear my eyes away to wrap myself in my thermal sleeping bag. The temperature variation from day to night is drastic and it’s now bitterly cold.

In the morning I wake up to the smell of sweet cardamom tea and an assortment of fruit. Fruit is still quite the novelty in the desert. Before access to cars the Bedouin lived off their animals, which meant a diet solely of meat, cheese and milk. Now they have a variety of traditional dishes, but Ali has left his favorite meal to the end.

Nicknamed the Bedouin barbeque, Zarb is a mixture of meat, rice and vegetables slow roasted for 24 hours underground over wooden coals. Back in camp, Ali’s family – young and old enthuse over us whilst a huge clay pot is being dug out from under the sand. Zarb is exquisite. The tender lamb melts in my mouth as the spices explode.

“This is my favorite dish not only because it tastes good but because of how it was created,” he says. During the Ottoman rule, the Bedouin had problems with soldiers continuously stealing all of their food so they began to hide and cook their meat underground. Sometimes it would have to remain hidden for days. Zarb means "to hide" in Arabic.

Ali recognizes that times are different. Borders and changing climates result in water and food sources becoming ever scarcer. On our return, as we approach the edge of the desert, we pass dozens of 4x4s zooming past with tourists. It’s almost as if the desert world behind us no longer exists.

Ali has decided to send his children down a different path by sending them to the nearest school.

“The desert used to seem endless but now the outside world and its complexities, including tourism, are reaching in," he tells me. "We have to adapt.”

Ali’s children are still Bedouin through and through.

“Every weekend and summer they come with me to the desert and I teach them everything that I know just like my father did with me. I want to make sure our way of life is not forgotten.”

I have learned a great deal from Ali and his family and can understand why he is so reluctant to jump into the modern world. Standing in the vast expanse of limitless beauty is humbling, and at night with the infinite number of stars on show – an overwhelming reminder of how tiny we are. But the real magic of Wadi Rum comes from the heart and hospitality of its people, whose lifestyle remains a living testament to ancient history.

The trip that changed my life: carefree campervan adventure in Scotland
Why Alaska's stunning coast is best seen by ferry
Local guides reveal the secrets of Italy's Dolomites

Another mysterious monolith appeared in California... and then suddenly disappeared

2 min read • Published about 16 hours ago

6 of the best destinations for yoga travel