Japan is famous for its efficient rail system and doesn't exactly scream road trip. But when most people think of Japan, they usually don't think of Hokkaidō. In contrast to Japan's densely populated main island of Honshū, Hokkaidō is home to just 5% of Japan's population on 20% of its land. There are trains here too, of course, but the network is limited. Even Hokkaidō's cities, laid out in neat grids of wide streets, are easy to navigate by car.

Explore Japan’s northernmost island with your own wheels and you’ll have the freedom to detour to sapphire-blue caldera lakes, stop to dip in seaside hot springs, and pull over wherever fresh seafood beckons. Another bonus: accommodation and food are both cheaper on unfussy Hokkaidō than on Honshū. Get your road trip started with our suggested itinerary. 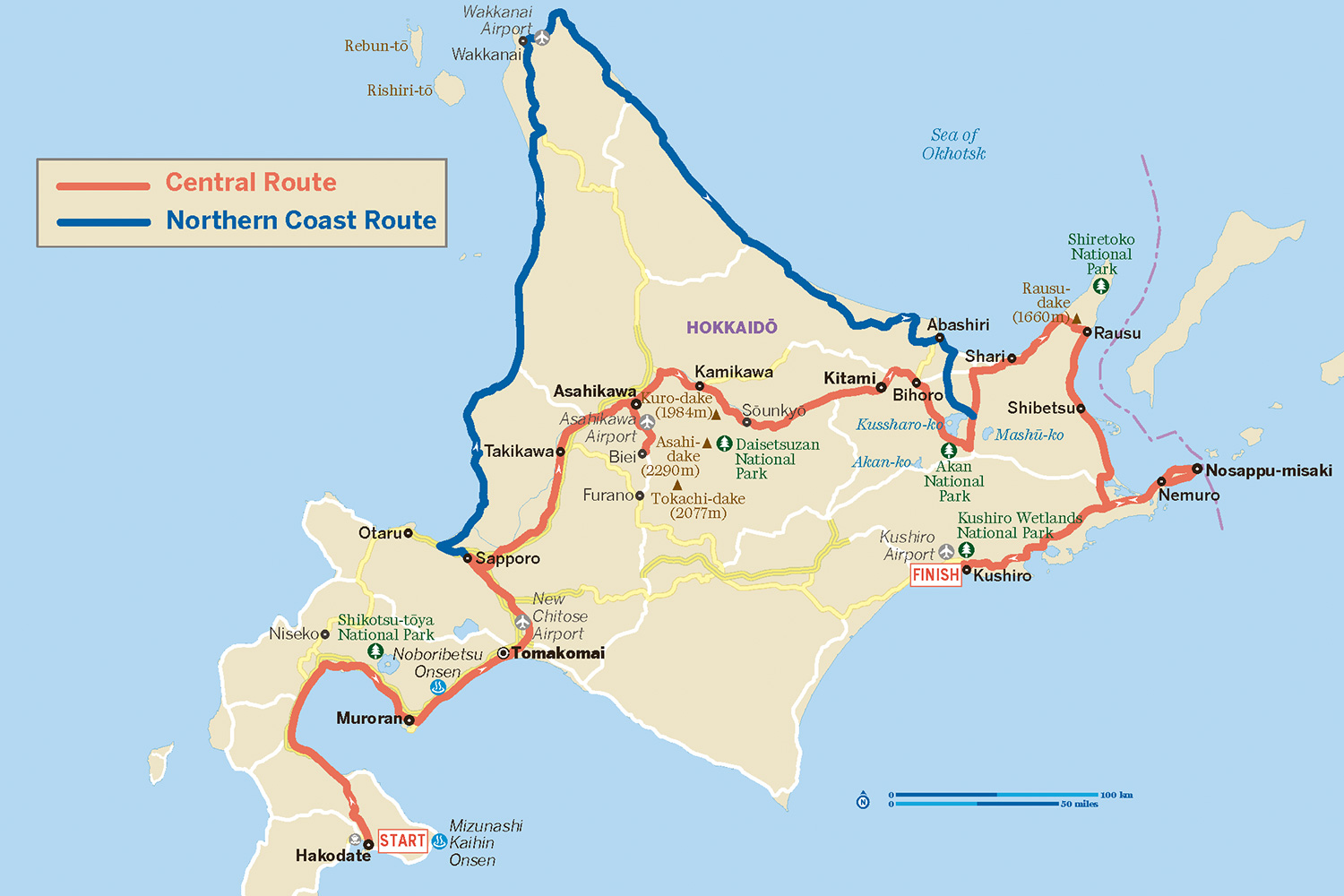 Hakodate is Hokkaidō's southernmost port, where car ferries from Honshū disembark – and where you're now able to arrive via shinkansen (bullet train) from Tokyo and other points south through the Seikan Tunnel – making it a great road-trip starting point. Hakodate's two big attractions are its morning market and the night view from the top of Hakodate-yama. The market is a showcase for the rich bounty of Hokkaidō's seas, which you can sample in the form of kaisen-don, a dish of raw seafood on rice, at Kikuyo Shokudō (hakodate-kikuyo.com).

From Hakodate there are a couple of onsen (hot spring) options: the steaming hell pits of Hokkaidō's most famous onsen, Noboribetsu, or the casual seaside pools at Mizunashi Kaihin Onsen (or both). The latter is on the Kameda Peninsula east of Hakodate, and is regulated by the tides. Noboribetsu is north of the city, along the coastal highway heading towards Sapporo. You know you're getting close when you can smell the sulphur. Indeed you can follow your nose to a number of onsen in Hokkaidō.

Continue on to Sapporo, the capital of Hokkaidō and the only place on the island that feels urban. The city is short on major sights but big on food and drink: it's the home of Sapporo beer and miso ramen. Outside the city, you can tour the Hokkaidō Brewery. You'll also be grateful for your wheels when you head out to Menya Saimi (5-3-12, 10-jō Misono, Toyohira-ku; 011-820-6511), arguably Sapporo's best ramen shop, located in an otherwise nondescript residential neighbourhood.

Both Hakodate and Sapporo have scores of good-value business hotels with double rooms for around ¥6000 (US$50). Noboribetsu is an onsen town with many places to stay, including sprawling Dai-ichi Takimoto-kan.

You can think of Hokkaidō as having three distinct routes: the northern coast, the southern coast and the dead centre. The central route towards Akan National Park is far and away the most interesting, passing Daisetsuzan National Park. This is Hokkaidō's largest park, with several volcanic mountain ranges, alpine meadows and a good deal of wildlife. You can base yourself for a couple of days at one of the three onsen towns, Asahidake, Sōunkyō and Tokachi-dake, and hit the trails. Count yourself lucky if you can secure one of the six rooms at Lodge Nutapukaushipe, an eccentric log house with wood-burning stoves. En route to Daisetsuzan, it's worth taking a detour to Biei, where a network of country lanes winds through fields of wildflowers.

The other attractive option from Sapporo – especially for those with a fondness for stretches of desolate coastline – is to take the long northern route up to Wakkanai, a very windy former trading post from where ferries depart to remote Rebun-tō and Rishiri-tō. From Wakkanai, you can continue down Rte 238 along the Sea of Okhotsk. (You could also do this stretch on the way to Akan and visit Daisetsuzan on the way back to Sapporo.)

From Akan National Park head north until you reach Rte 334 on the coast, then turn east towards the Shiretoko Peninsula. At the end of the road is the waterfall, Kamuiwakka-yu-no-taki. You can take a dip (in a swimsuit) in the fall's lower pool; the water is warm as the river above is fed from a hot spring. Beyond is Shiretoko National Park – true wilderness, as no cars are allowed in. If you want to pause your road trip, consider tackling the Shiretoko Traverse, a two-day hike that spans the park. Otherwise you can enjoy the scenery while driving through the Shiretoko Pass, which goes by mountain Rausu-dake and beech forests. On the other side of the peninsula, on the Nemuro Strait, Rte 87 runs up the coast nearly to the tip. Here there are a couple of teeny-tiny onsen, such as Seseki Onsen. In the evening, the harbours on the east coast are illuminated by the lights of squid boats night fishing.

Nemuro is the other little finger stretching out on Hokkaidō's east coast. At the tip, Nosappu-misaki marks the easternmost part of Japan – those islands you can see on the horizon are Russia. There's not much else to see here, but there is a good place to eat: Suzuki Shokudō (32 Nosappu, Nemuro; 0153-28-3198) draws visitors from afar for its sanma-don (raw Pacific saury on rice) and its signature way of doing miso soup with a whole crab in it. The diner also runs a small raidā hausu (rider house), dirt-cheap dorm-style accommodation for motorcyclists and cyclists, of which Hokkaidō has many.

From Nemuro you can take Rte 44 down to Kushiro to visit the Japanese Crane Reserve. Kushiro also has an airport with flights back to Tokyo. Or continue down to Tomakomai, where you can catch the car ferry (sunflower.co.jp) that runs all the way to Oarai in Ibaraki (two hours north of Tokyo) in 17.5 hours. There is a public bath and a movie theatre on board!