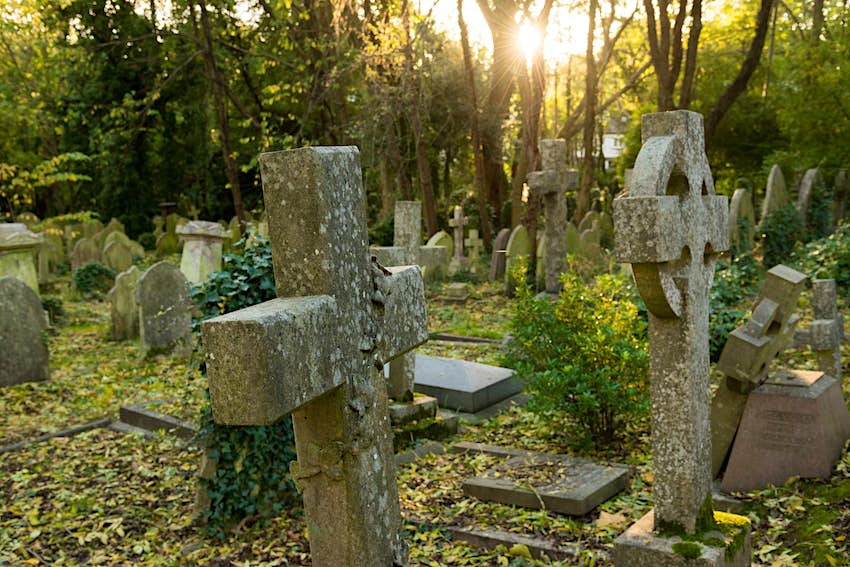 The delightfully Gothic, Victorian-era Highgate Cemetery in north London is the final resting place for a long list of famous names, including Karl Marx, George Michael and Douglas Adams, and for the first time in decades, all parts of the burial grounds will be open to free-roaming visitors – no tour required.

Usually the West Cemetery can be accessed by guided tour only, but as an experiment, the cemetery is opening this weekend without the need to go on a tour. The West Cemetery includes thousands of ivy-choked gravestones with Victorian funerary motifs, such as broken columns, sleeping and urns draped in fabric. One of the most striking features is the Egyptian Avenue, a darkened pathway of mausoleums flanked at the entrance by imposing columns and obelisks. Nearby is the Circle of Lebanon, named for an ancient cedar tree that predated Highgate Cemetery, with ornamented mausoleums at the base encircling the tree’s roots. More than 170,000 people are buried in 53,000 graves across the entire cemetery’s 15 hectares.

Highgate Cemetery was built as one of London’s ‘Magnificent Seven’, created by an Act of Parliament to move burials out of central churchyards and further into the countryside, which has now been swallowed up by London’s ever-expanding boundaries. Highgate quickly became one of the capital’s most fashionable places to be buried in the 19th century, resulting in afterlife one-upmanship as ever more elaborate gravestones and mausoleums were constructed.

The West Cemetery opening trial is running this weekend on 11 July and 12 July, and further dates could be announced. Online booking in advance is essential as tickets are not being sold at the cemetery to reduce contact with visitors during the coronavirus pandemic.

Cemetery tourism: an ethical traveller's guide to graveyards
Visiting ghosts of the past in these 6 US cemeteries
Glimpse inside some of London's most famous buildings