Forget keycards, how about an iPhone to access your suite? From electronic art hotels to igloos and wine barrels, these places will guarantee you a memorable, and affordable, trip. We look at a selection of Europe's most unusual places to stay, chosen by Lonely Planet magazine.

Get banged up in Switzerland

Most people try to avoid or escape incarceration, but at the Swiss Jailhotel Löwengraben, you get locked up out of choice. Lucerne’s least desirable address until 1998, the 19th-century prison has now been adapted to hold inmates of a very different kind. The simplest rooms are former cells, renovated to recreate the spartan aesthetic of prison life, with sparse furnishings and shared bathrooms. The former prison library, however, is now a suite with floor-to-ceiling books, while the warden’s office betrays the trappings of power with a formidable steel safe. The visitors’ room is a stylishly designed suite that allegedly has the fewest ghosts, but the most thought-provoking experience is in the Barabas suite – it has a colourful painting depicting post-jailbreak scenes as imagined by a former inmate. Not surprisingly, there’s also a bar called Alcatraz.

Imagine a place where the rooms choose you instead of the other way around, and where you receive an iPhone instead of a room key. Well, Blow Up Hall 5050 in Poznan, Poland, is the brainchild of electronic artist Rafael Lozano Hemmer and staying there means you become part of his art show. It begins when you book a room on its website. You pick colours, pictures and numbers, and the personality that your choices reveal determines your room – including zebra stripes and all-white schemes. Throughout the hotel, there are interactive touch screens and, thanks to the hidden cameras, your image contributes to a real-time video collage in the reception area.

Dream among the fairy chimneys of Cappadocia 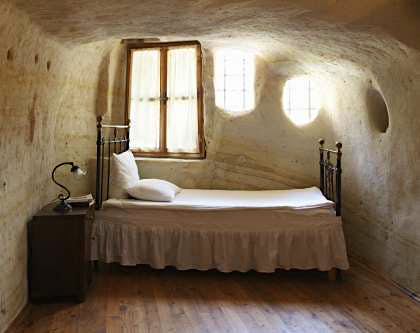 The landscape of Turkey’s Cappadocia region looks a bit like it has sprung from a child’s imagination, like something out of a fairy-tale, and the hotel Esbelli Evi is very much a part of its fantastical surroundings. Parts of the hotel have been built, but just as much of it seems to have occurred naturally. Unusual clefts in the rock replace doors, yielding to staircases worn smooth by centuries of pre-hotel use, while fireplaces send a breath of smoke up the locally famous fairy chimneys. This was the region’s first boutique hotel and the human touches in its interiors are rooted in local landscape and culture – blood red Turkish carpets, dark Ottoman furnishings and traditional lace curtains offset the pale sandstone walls and hardwood floors beautifully. From the terrace, the views over a landscape sculpted by the centuries are unrivalled.

Hold Station in a sleeper in South England

Old Pullman railway carriages, the likes of which once rattled along the rails as part of the Orient Express, never die – at least not at The Old Railway Station in Petworth, England. Staying in one of four beautifully restored train carriages provides a chance to reclaim the past and travel back to a time when small-town England and its country railway stations were essential pillars of local life. The old peeling carriage exteriors add period authenticity, but they also deceive as tastefully restored interiors manage to combine modern comforts with a reassuring rail-carriage feel. How they managed to lever king-sized brass beds into some of the carriages remains a mystery. Inside the late-19th-century station house, the former ticket office is now the hotel’s reception, while the charming waiting area has evolved into a breakfast room filled with railway collectibles. There are also rooms in the old station house itself.

Get battered in a Norwegian lighthouse

On a rocky headland close to the Western Fjords, Kråkenesfyr is the perfect vantage point from which to view Norway’s beautiful shore. The most sought-after room is the suite on the top floor of the lighthouse itself – a circular, panoramic perch looking out over the ocean. The other rooms occupy the former lighthouse keeper’s cottage. As massive North Atlantic waves buffet the shore down below, it’s easy to imagine the loneliness of the lighthouse keeper’s existence. But lighthouses are a call to refuge from the elements. Warm tones and Scandinavian pinewood furnishings transform a stay here into a splendid experience of windswept isolation perfectly suited to this wild coast.

Immerse yourself in art in Denmark 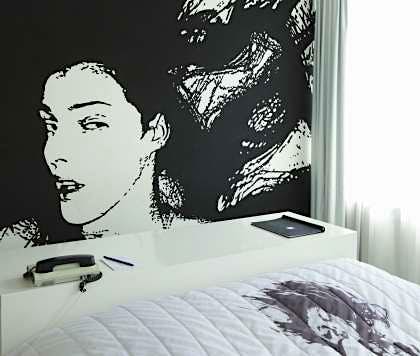 Not many contemporary art galleries let you crawl inside your chosen masterpiece, but that is effectively what happens at Copenhagen’s Hotel Fox. The rooms are the work of 21 internationally renowned graphic artists and illustrators, and the dramatic results range from comic-book chic to faux fin-de-siècle creations. Far from the enervating anonymity of so many hotels, every single room in Hotel Fox has its own identity and name. Room 206 is called Ecstasy and is dominated by a sultry, wall-high, raven-haired siren. Just down the hall, Room 202 – You Are a Baby – sends you back to your childhood playpen with a baby bedspread, a hanging mobile and bright primary colours. Then there is Room 409, which is called Heidi and is an over-the-top homage to rural Swiss life, complete with antlers, and Room 504 on the next floor up has a boxing theme.

Spend the night with a Transylvanian Count

It must be difficult living in the shadow of the world’s most famous vampire, but the owner of Count Kálnoky’s estate, Count Tibor carries it off with aplomb. Death by kindness is the only danger if you stay in one of his guesthouses in the Romanian village of Miklósvár. Beautifully styled, the 19th-century former hunting lodges are only part of the story. An environmentalist, Count Tibor has an ulterior motive – he aims to connect local village life with the outside world. You might, for example, spend the day with the local beekeeper, blacksmith or go on a variety of nature walks. Then in the evening, this being Transylvania, the count loves to regale his guests with ghost stories.

Curl up in a glass igloo in Lapland

Ice hotels may have become the accommodation icons for the Arctic, but Finland’s Hotel Kakslauttanen & Igloo Village could change all that. In the hotel’s year-round glass igloos, a creative twist on traditional Lapland architecture, you lie in bed beneath thermo glass and watch the amazing night sky, toasty warm even as outside temperatures drop well below freezing. Where else on earth would you be able to see the aurora borealis (northern lights) from the comfort of your bed? Located 250 miles inside the Arctic Circle, the hotel also offers winter-only ice igloos, husky safaris, ice swimming, ice-fishing, snowmobile travel and what they claim to be the world’s largest smoke sauna. All well and good, but this is likely to be one place where you’ll end up wanting to spend as much time as you can in your million-star room.

This article is reproduced from Lonely Planet magazine, on sale now across the UK priced £3.60. Make sure you never miss an issue with a monthly subscription (available only to UK residents).

Galápagos wildlife spotting: why you should go underwater 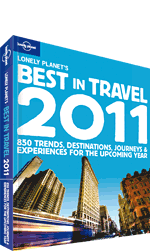