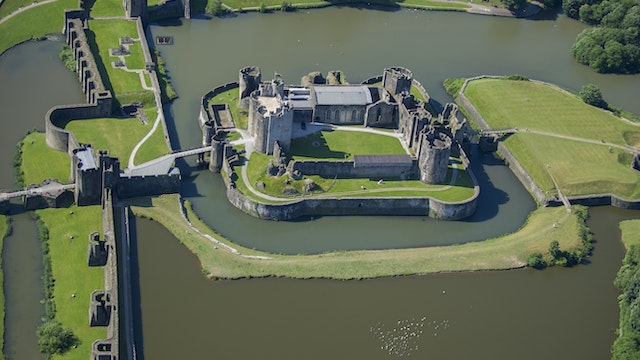 You could be forgiven for thinking that Caerphilly Castle – with its profusion of towers and crenellations reflected in a duck-filled lake – was a film set rather than an ancient monument. While it is often used as a film set, it is also one of Britain's finest examples of a 13th-century fortress with water defences, and the largest castle in Wales.

Most of the construction was completed between 1268 and 1271 by the powerful English baron Gilbert de Clare (1243–95), lord marcher of Glamorgan, in response to the threat of attack by Prince Llywelyn ap Gruffydd, prince of Gwynedd (and the last Welsh Prince of Wales), who had already united most of the country under his control. Edward I's subsequent campaign against the Welsh princes put an end to Llywelyn's ambitions and Caerphilly's short-lived spell on the front line came to an end. The leaning tower at the southeastern corner is a result of subsidence rather than battle.

In the 13th century Caerphilly was state-of-the-art, being one of the earliest castles to use lakes, bridges and a series of concentric fortifications for defence. To reach the inner court you had to overcome no fewer than three drawbridges, six portcullises and five sets of double gates. In the early 14th century it was remodelled as a grand residence and the magnificent great hall was adapted for entertaining, but from the mid-14th century the castle began to fall into ruin.

Much of what you see today is the result of restoration by the castle-loving Bute family. The third marquess of Bute purchased and demolished houses built up against the walls, and in 1870 the great hall was given a magnificent wooden ceiling. The fourth marquess instituted a major restoration from 1928 to 1939, giving jobs to many Great Depression–affected locals in the process. Work continued after 1950, when the fifth marquess gifted the castle to the state. In 1958 the dams were reflooded, creating the castle's current fairy-tale appearance.

You can enter through the outside gate and into the first tower before reaching the ticket office. Upstairs are detailed displays about the castle's history. A cartoonish film projected onto the walls of one of the inner towers tells a truncated version of the same story.

On the south dam platform you can see reconstructions of medieval siege weapons; they are working models that lob stone projectiles into the lake during battle re-enactments. Fans of toilet humour should seek out the communal latrine in a small tower nearby.