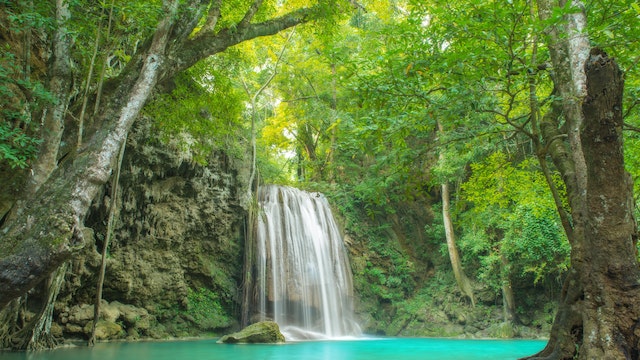 Splashing in emerald-green pools under Erawan Falls is the highlight of this very popular 550-sq-km park. Seven tiers of waterfall tumble through the forest, and bathing beneath these crystalline cascades is equally popular with locals and visitors. Reaching the first three tiers is easy; beyond here, walking shoes and some endurance are needed to complete the steep 2km hike but it's undoubtedly worth it.

Bring a swimming costume (and a cover-up T-shirt if you don't want to be gawked at by more modest Thai visitors), but be aware you're sharing the bathing area with large, nibbling fish, and monkeys have been known to snatch swimmers' belongings. Level four has a natural rock slide and level six usually has the fewest swimmers. If you hit the trail early you can briefly have the place mostly to yourself. You can't take food beyond level two and though bottles of water are permitted, to prevent littering, you have to register them and leave a 20B returnable deposit. Buggies (adult/child 30/15B) can transport people to the first level.

You can escape the crowds near the waterfall by taking a ranger-led walk (arranged at the visitor centre: you must pay, but there's no set fee) on the 5km Khao Hin Lan Pee Trail that takes you through the forest to the falls' fifth tier. Elsewhere in the park, Tham Phra That is a seldom-visited cave full of shimmering limestone formations. There are some other fantastic caves in the park, but they've been closed to the public for years and may never reopen.

The park was named for Erawan, the three-headed elephant of Hindu mythology, whom the top tier is thought to resemble. Mixed deciduous forest covers over 80% of the park, but there's also dry evergreen and dry dipterocarp forest and big swathes of bamboo. Tigers, elephants, sambar deer, gibbons, red giant flying squirrels, king cobras and hornbills call the park home, but they don't frequent the waterfall area and the only large animal you might spot other than monkeys is wild boar.

Park bungalows sleep between two and eight people and there is a campground. Tent hire available.

Erawan is 65km north of Kanchanaburi. Buses (50B, 1½ hours) run hourly from 8am to 5.50pm and go right to the visitor centre, which is staffed 24 hours. The last bus back to town is at 5pm, and on weekends it will be packed. Touts at the bus station will try to talk you into hiring a private driver instead of taking the bus, but this isn't necessary.