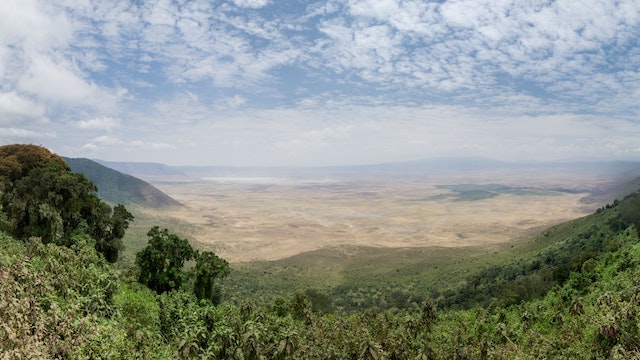 At 19km wide and with a surface of 264 sq km, Ngorongoro is one of the largest unbroken calderas in the world that isn’t a lake. Its steep walls soar 400m to 610m and provide the setting for an incredible natural drama, as prey and predators graze and stalk their way around the open grasslands, swamps and acacia woodland on the crater floor. It's such an impressive sight that, other vehicles aside, you'll wonder whether you've descended into a wildlife paradise.

There are plenty of hippos around the lovely Ngoitoktok Springs picnic site, and Lake Magadi attracts flocks of flamingos to its shallows in the rainy season. Lereal Forest (which has a less appealing picnic site, and is the starting point for the Lereal or Lerai ascent road) is good for elephants, of which there are 200 to 300 in the crater. Predators include around 600 spotted hyenas, 55 lions (at last count), and both golden and black-backed jackals. These predators are sustained by large numbers of resident herbivores, with wildebeest, zebras, buffaloes and Grant's gazelles the most common. Less commonly seen are elands, warthogs, hartebeests, bushbucks, waterbucks and bohor reedbucks. Around 20% of the wildebeest and zebras migrate annually between the crater and the Serengeti. Another huge drawcard is the chance to see the critically endangered black rhino – around 30 inhabit the crater floor, and they're most often seen between the Lereal Forest and the Lemala ascent-descent road.

The reason for all this abundance is the presence of water, both from the permanent springs that sustain the swamps, and the permanent streams and rivers fed by run-off from the crater-rim forests.

The main route into the crater is the Seneto descent road, which enters the crater on its western side. To come out, use the Lerai ascent road, which starts south of Lake Magadi and leads to the rim near park headquarters. The Lemala road is on the northeastern side of the crater near Ngorongoro Sopa Lodge and is used for both ascent and descent.

The gates open at 6am and close for descent at 4pm; all vehicles must be out of the crater before 6pm. Officially, you're only allowed to stay down in the crater for a maximum of six hours, but this is rarely enforced. Self-drivers are supposed to hire a park ranger (US$23.60 per vehicle) for the crater – note that this rule is being more strictly enforced than it used to be and it's a long way back to the park gate to hire a ranger if they don't let you go down without one. All fees are valid for 24 hours, single entry only.