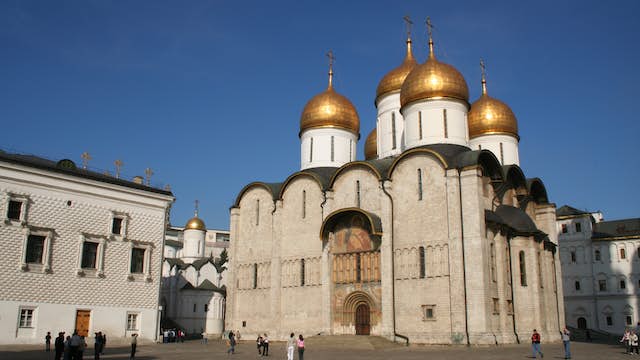 On the northern side of Sobornaya pl, with five golden helmet domes and four semicircular gables, the Assumption Cathedral is the focal church of pre-revolutionary Russia and the burial place of most of the heads of the Russian Orthodox Church from the 1320s to 1700. A striking 1660s fresco of the Virgin Mary faces Sobornaya pl, above the door once used for royal processions. If you have limited time, come straight here. The visitors' entrance is at the western end.

The interior of the Assumption Cathedral is unusually bright and spacious, full of warm reds, blues and gold. The west wall features a scene of the Apocalypse, a favourite theme of the Russian Church in the Middle Ages. The pillars have pictures of martyrs on them, as martyrs are considered to be the pillars of faith. Above the southern gates are frescoes of Yelena and Constantine, who brought Christianity to Greece and the south of Russia. The space above the northern gate is taken by Olga and Vladimir, who brought Christianity to the north.

Most of the existing murals on the cathedral walls were painted on a gilt base in the 1640s, with the exception of three grouped together on the south wall: The Apocalypse (Апокалипсис), The Life of Metropolitan Pyotr (Житие Митрополита Петра) and All Creatures Rejoice in Thee (О Тебе радуется). These are attributed to Dionysius and his followers, the cathedral's original 15th-century mural painters.

The tombs of many of the leaders of the Russian Church (metropolitans up to 1590, patriarchs from 1590 to 1700) are against the north, west and south walls. Near the west wall is a shrine with holy relics of Patriarch Hermogen, who was starved to death during the Time of Troubles in 1612.

Near the south wall, the tent-roofed wooden throne is known as the Throne of Monomakh. It was made in 1551 for Ivan the Terrible. Its carved scenes highlight the career of 12th-century Grand Prince Vladimir Monomakh of Kiev – considered to be Ivan's direct predecessor.

The iconostasis dates from 1652, but its lowest level contains some older icons. The 1340s Saviour with the Angry Eye (Спас ярое око) is second from the right. On the left of the central door is the Virgin of Vladimir (Владимирская Богоматерь), an early 15th-century Rublyov-school copy of Russia's most revered image, the Vladimir Icon of the Mother of God (Владимирская Икона Богоматери). The 12th-century original, now in Moscow's Tretyakov Gallery, stood in the Assumption Cathedral from the 1480s to 1930. One of the oldest Russian icons, the 12th-century red-clothed St George (Святой Георгий) from Novgorod, is positioned by the north wall.

The original icons of the lower, local tier are symbols of victory brought from Vladimir, Smolensk, Veliky Ustyug and other places. The south door was brought from the Nativity of the Virgin Cathedral in Suzdal.