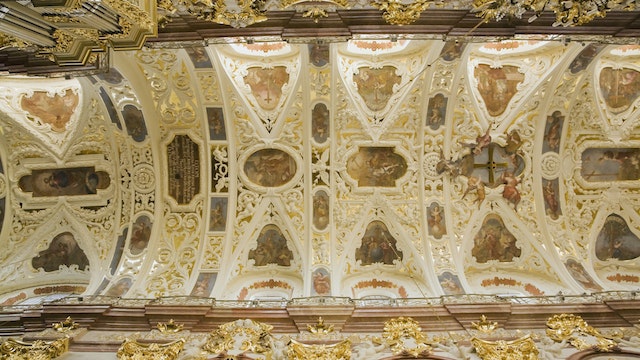 Poland’s spiritual capital began with the arrival of the Paulite order from Hungary in 1382, who named the 293m hill in the western part of the city ‘Jasna Góra’ (Bright Hill) and erected this monastery. Believers are drawn to the site for miracles credited to the Black Madonna painting in the Chapel of Our Lady, though there are many other sights worth seeing, too. The information centre arranges guided tours in English. The monastery entrance is on the south side.

The oldest part of the monastery, the Chapel of Our Lady, contains the revered Black Madonna. The picture is unveiled to soaring music and prayer at 6am and 1.30pm (2pm Saturday and Sunday) and covered again at noon and 9.20pm (1pm and 9.20pm Saturday and Sunday). Be sure to note the walls displaying votive offerings brought by pilgrims. Adjoining the chapel is the impressive basilica (bazylika). Its present shape dates to the 17th century and the interior has opulent baroque furnishings.

On the northern side of the chapel, paintings in the Knights’ Hall (Sala Rycerska) depict key events from the monastery’s history; there’s also an exact copy of the Black Madonna. Upstairs, the Golghota Gallery contains a series of unique paintings by celebrated local painter and cartoonist Jerzy Duda Gracz (1941–2004), whose evocative works are indicative of the monastery’s ability to preserve its historical heritage while maintaining modern relevance. Note that many pilgrims traverse the circumference of the chapel on their knees.

The 106m bell tower, the tallest historic church tower in Poland, offers views over the monastery complex and the expanse of al NMP. With many fallen predecessors, the current tower dates to 1906.

The small 600th Anniversary Museum contains fascinating artefacts, including the founding documents of Jasna Góra from 1382 and a cross made from steel from the rubble of the World Trade Center. Particularly moving are rosaries made from breadcrumbs by concentration camp prisoners. Lech Wałęsa’s 1983 Nobel Peace Prize, donated by its recipient, can be found beyond the Father Kordecki Conference Room. Items related to Pope John Paul II abound.

The arsenal contains various military mementos, including spoils of battle, offerings from soldiers and an impressive collection of Turkish weapons from the 1683 Battle of Vienna.

The 17th-century treasury contains votive offerings dating to the 15th century. Since the 17th century, records have been kept of gifts given to the Madonna, including the many bejewelled shrouds.