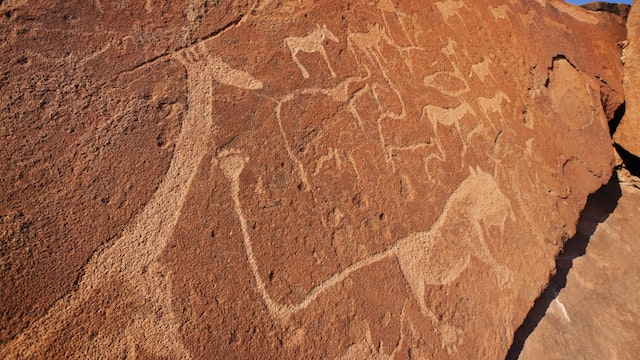 Twyfelfontein (Doubtful Spring), at the head of the grassy Aba Huab Valley, is one of the most extensive rock-art galleries on the continent. In the ancient past, this perennial spring most likely attracted wildlife, creating a paradise for the hunters who eventually left their marks on the surrounding rocks. Animals, animal tracks and geometric designs are well represented here, though there are surprisingly few human figures.

Many of the engravings depict animals that are no longer found in the area – elephants, rhinos, giraffes and lions – and an engraving of a sea lion indicates contact with the coast more than 100km away. To date over 2500 engravings have been discovered, and Twyfelfontein became a national monument in 1952. Unfortunately, the site did not receive formal protection until 1986, when it was designated a natural reserve. In the interim, many petroglyphs were damaged by vandals, and some were even removed altogether.

A significant amount of restoration work has taken place here in recent years, a welcome development that hasn’t gone unnoticed by the international community. In 2007 Twyfelfontein was declared a Unesco World Heritage Site, the first such distinction in the whole of Namibia. Guides are compulsory; note that tips are their only source of income.