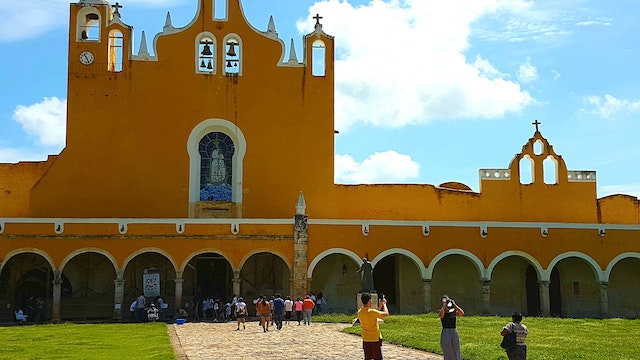 When the Spaniards conquered Izamal, they destroyed the major Maya temple, the Ppapp-Hol-Chac pyramid, and in 1533 began to build from its stones one of the first monasteries in the western hemisphere. Work on Convento de San Antonio de Padua was finished in 1561. Under the monastery’s arcades, look for building stones with an unmistakable mazelike design; these were clearly taken from the earlier Maya temple.

The monastery’s principal church is the Santuario de la Virgen de Izamal, approached by a ramp from the main square. The ramp leads into the Atrium, a huge arcaded courtyard in which the fiesta of the Virgin of Izamal takes place each August 15.

At some point the 16th-century frescoes beside the entrance of the sanctuary were completely painted over. For years they lay concealed under a thin layer of whitewash until a maintenance worker who was cleaning the walls discovered them.

The church’s original altarpiece was destroyed by a fire believed to have been started by a fallen candle. Its replacement, impressively gilded, was built in the 1940s. In the niches at the stations of the cross are some superb small figures.

In the small courtyard to the left of the church, look up and toward the Atrium to see the original sundial projecting from the roof’s edge. A small museum at the back commemorates Pope John Paul II’s 1993 visit to the monastery. He brought with him a silver crown for the statue of the patron saint of Yucatán, the Virgin of Izamal.

The monastery’s front entrance faces west; it’s flanked by Calles 31 and 33 on the north and south, respectively, and Calles 28 and 30 on the east and west.