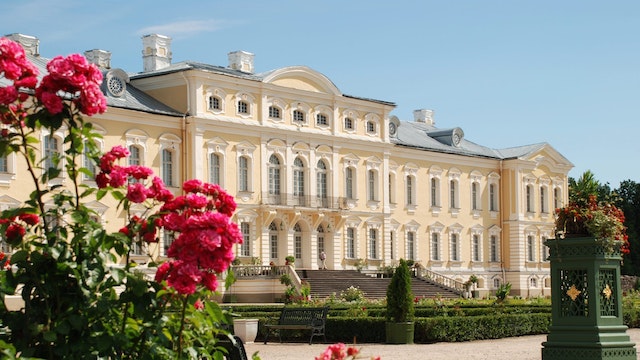 Built as a grand residence for the Duke of Courland, this magnificent palace is a monument to 18th-century aristocratic ostentatiousness, and is rural Latvia's architectural highlight. It was designed by Italian baroque genius Bartolomeo Rastrelli, who is best known for the Winter Palace in St Petersburg. About 40 of the palace's 138 rooms are open to visitors, as are the wonderful formal gardens, inspired by those at Versailles. Detailed displays inside the palace offer fascinating insight into its design and restoration.

Ernst Johann Biron started his career as a groom and lover of Anna Ioanovna, the Russian-born Duchess of Courland. She gave him the duchy when she became Russian empress, but he stayed with her in St Petersburg, turning into the most powerful political figure of the empire. In 1736 he commissoned the Italian architect Bartholomeo Rastrelli to construct his summer residence near Bauska.

Russian authors later blamed Biron for ushering in a era of terror, but many historians believe his role in the persecution of the nobility was exaggerated. On her death bed, the empress proclaimed Biron the Regent of Russia, but two months later his rivals arrested him and sentenced him to death by quartering. The sentence was commuted to exile. The unfinished palace stood as an empty shell for another 22 years when, pardoned by Catherine II, Ernst Johann returned home. Rastrelli resumed the construction and in 1768 the palace was finished. Ernst Johann died four years later at the age of 82. A succession of Russian nobles inhabited (and altered) the palace after the the Duchy of Courland was incorporated into Russian Empire in 1795.

The castle is divided into two halves; the East Wing was devoted to formal occasions, while the West Wing was the private royal residence. The Royal Gardens, inspired by the gardens at Versailles, were also used for public affairs. The rooms were heated by a network of 80 porcelain stoves (only six authentic stoves remain), as the castle was mostly used during the warmer months.

The palace was badly damaged in the Franco-Russian War in 1812 and again during the Latvian War of Independence in 1919 – what you see now is the result of a painstaking restoration started by experts from Leningrad in 1972 and officially finished in 2015. Definitely spend an extra €3 and opt for the 'long route' option when buying the ticket. Unlike the short route, it includes the duke's and duchess's private chambers, which is your chance to peek into the everyday life of 18th-century aristocrats as well as to admire the opulent interior design. Even the duke's chamber pot, adorned with a delightful painting of swimming salmon, is on display. Outside, the palace and park are surrounded by lush apple orchards.

Like any good castle, Rundāle has loads of eerie ghost tales, but the most famous spectre that haunts the palace grounds is the ‘White Lady’. In the 19th century the royal doctor had a young daughter who was courted by many men, but on her 18th birthday she suddenly grew ill and died. Obsessed with her untimely demise, the doctor kept her corpse in his laboratory to study her and tried to figure out why she was ravaged by illness (or was she poisoned by a lovelorn suitor?). Unable to rest eternally, the daughter’s spirit began haunting the castle and cackling wildly in the middle of the night. During Rundāle’s restorations, several art historians and masons heard her wicked laughter and brought in a priest to exorcise the grounds.