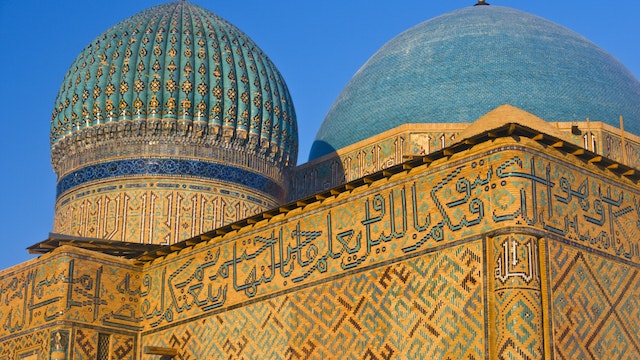 This astoundingly beautiful, tiled mausoleum with a turquoise dome is home to Kozha Akhmed Yasaui. The main chamber is capped with an 18m-wide dome, above a vast, 2000kg, metal kazan (cauldron) for holy water, given by Timur, who had the tomb built in the 14th century. Yasaui’s tomb lies behind an ornate wooden door at the end of the main chamber: you can view it through grilles from corridors on either side.

The right-hand corridor contains the tomb of Abylay Khan, leader of Kazakh resistance to the Zhungars in the 18th century. Off the main chamber's far left corner is the mausoleum’s carpeted mosque, with a beautifully tiled mihrab (Mecca-facing niche). Except in the mosque, visitors to the mausoleum don’t usually remove shoes though women normally wear headscarves (available at the entrance).

The glorious blue, turquoise and white tiling on the outside of the building is the highlight for most and merits close inspection. Note the particularly lovely fluted rear dome, above Yasaui’s tomb chamber.

Yasaui’s original small tomb was already a place of pilgrimage before Timur ordered a far grander mausoleum built here in the 1390s. Timur died before it was completed and the main facade was left unfinished – today it remains bare of the beautiful tilework that adorns the rest of the building, with scaffolding poles still protruding.