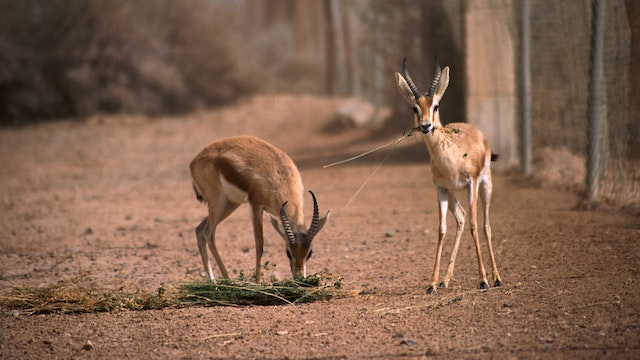 Established in 1975 by the Royal Society for the Conservation of Nature (RSCN), this 22 sq km reserve was created with the aim of reintroducing wildlife that has disappeared from the region, most notably the highly endangered Arabian oryx, Persian onagers (wild ass), Dorcas gazelles and houbara bustards. The reserve has recently undergone a radical overhaul to make it an excellent and singular Jordanian tourism experience.

The startlingly modernist visitor centre provides a mass of information on the area's ecosystems, as well as the biology of its most celebrated inhabitants. Enclosures allow you to get a good view of oryx, onagers, gazelles and bustards before leaving for the safari experience (JD20). You ride in special safari jeeps with raised seats, and the guides are fonts of knowledge on the flora and fauna, as well as being experts at picking out distant wildlife (onagers in particular are very skittish and require the provided binoculars to spot).

A special area is set aside for the oryx captive breeding program that has helped rescue the species from extinction. It's often possible to see calves. Near the entrance is a reserved aviary, which houses falcons that have been confiscated by rangers from Gulf Arabs who visit the region to illegally hunt. After rehabilitation the birds are reintroduced to the wild. Another bird likely to make a return to Shaumari soon is the ostrich, as the RSCN is currently looking at plans to reintroduce the species, which had been hunted to oblivion in the area.

The turning for Shaumari is well signposted, 7km from the Azraq T-junction, along the road to the Saudi border. A minimum of four people is required for the safari, which lasts up to three hours.