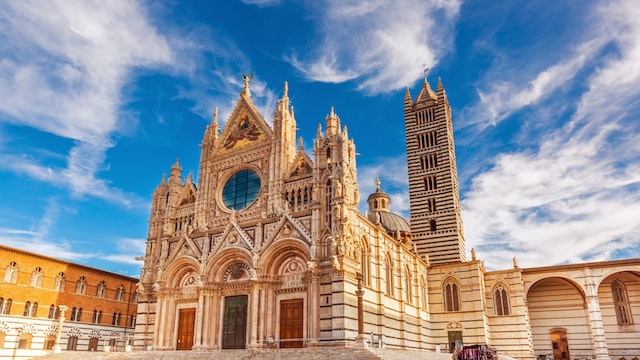 Consecrated on the former site of a Roman temple in 1179 and constructed over the 13th and 14th centuries, Siena's majestic duomo (cathedral) showcases the talents of many great medieval and Renaissance architects and artists: Giovanni Pisano designed the intricate white, green and red marble facade; Nicola Pisano carved the elaborate pulpit; Pinturicchio painted the frescoes in the extraordinary Libreria Piccolomini; and Michelangelo, Donatello and Gian Lorenzo Bernini all produced sculptures.

This triumph of Romanesque-Gothic architecture has a truly stunning interior. Walls and pillars continue the exterior's striped theme, while the vaults are painted blue with gold stars. The intricate floor is inlaid with 56 panels depicting historical and biblical scenes executed by about 40 artists over 200 years from the 14th century on. The older rectangular panels, including the Wheel of Fortune (1372) and The She-Wolf of Siena with the Emblems of the Confederate Cities (1373), are graffiti designs by unknown artists. Domenico di Niccoló (dei Cori) was the first known artist to work on the cathedral, contributing several panels between 1413 and 1423, followed by renowned painter Domenico di Bartolo, who contributed Emperor Sigismund Enthroned in 1434. In the 15th century, director Alberto Aringhieri and celebrated Sienese artist Domenico (di Pace) Beccafumi created the dramatic expansion of the floor scheme. These later panels feature more advanced multicoloured marble, inlaid with hexagon and rhombus frames. Unfortunately, many panels are covered for much of the year, only being revealed between mid-August and late October, when ticket prices increase and opening hours on Sundays are extended (9.30am-5.30pm). During this time, it's a good idea to pre-purchase tickets online, which will allow you to skip often long queues.

Other drawcards include the exquisitely crafted marble-and-porphyry pulpit created by Nicola Pisano, assisted by his son Giovanni and Arnolfo di Cambio, who later designed Florence's duomo. Intricately carved with vigorous, realistic crowd scenes, it's one of the masterpieces of Gothic sculpture. Over from the pulpit to the right of the transept, the Cappella del Voto harbours two marble statues of St Jerome and Mary Magdalene by baroque maestro Gian Lorenzo Bernini.

Donatello's famous bronze St John the Baptist headlines in the Cappella di San Giovanni Battista, next to the Libreria Piccolomini. This enchanting library, accessible through a door from the north aisle, was built to house the books of Enea Silvio Piccolomini, better known as Pius II. The walls of the small hall are decorated with vividly coloured narrative frescoes painted between 1502 and 1507 by Pinturicchio (Bernardino di Betto), depicting events in the life of Piccolomini. Nearby, on the Piccolomini altar, you can admire four saintly sculptures by the young Michelangelo. Some art historians believe that the sculpture St Paul is in fact a self-portrait of Michelangelo, with the broken-looking nose referencing the injury that fellow sculptor Pietro Torrigiano inflicted on him out of jealousy when both were honing their art in Florence.

The duomo could have been grander still: in 1339 the city's medieval rulers drew up plans to build an immense new nave and have the present church become its transept. If the project had gone ahead, Siena would have been the proud possessor of one of Italy's biggest churches. However, it wasn't to be. The devastating plague of 1348 put a stop to work and all that remains of the Duomo Nuovo (New Cathedral) is its massive unfinished facade on the eastern side of the cathedral, which can be accessed through the Museo dell'Opera.

Entry to the duomo and Libreria Piccolomini is included in the OPA SI and Acropoli passes.