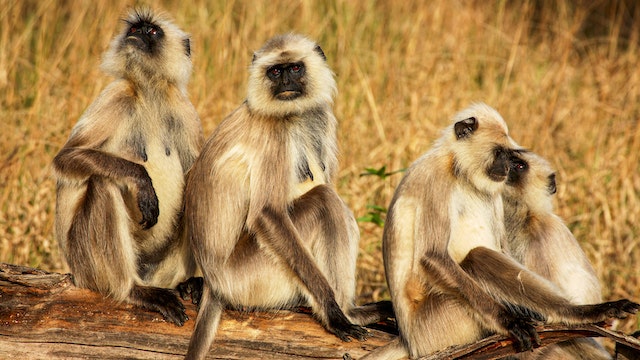 Madhya Pradesh is the king of the jungle when it comes to tiger parks, and Kanha is its most famous. The forests are vast, and while your chances of seeing a tiger are probably slimmer than at nearby Bandhavgarh, this is still one of India's best parks for sightings. The sal forests and vast meadows are home to approximately 125 tigers and 100 leopards.

The tiger reserve covers 2059 sq km including the 940-sq-km Kanha National Park which is the reserve's core zone. The reserve supports huge populations of deer and antelope, including the southern swamp deer (barasingha) which exists nowhere else. You’ll see plenty of langurs and varied birds, the odd gaur (Indian bison), maybe even a family or two of wild boar and perhaps a lonesome jackal or two.

Safaris venture into four zones within the core zone, of which Kisli and Mukki zones have the best reputations for tiger sightings, followed by Kanha zone then Sarhi zone. Kisli and Kanha zones are best accessed from the Khatia gate on the western edge of the reserve. Mukki zone is best accessed from the Mukki gate on the south side, a 54km, 1½-hour drive from Khatia.

Up to 140 six-passenger 4WDs (known as Gypsies, because most of them are the Suzuki Gypsy make) are allowed into the reserve per day, but most of these can only be booked online (http://forest.mponline.gov.in, up to 120 days in advance) and the website does not accept foreign cards for payment. Save yourself immense hassle by booking through a hotel/agency (usually an additional ₹1000) – and make arrangements as far ahead as possible, because popular zones sell out months ahead.

Tickets for 15 4WDs per day (90 seats, divided between the four zones and morning and afternoon safaris) can be purchased in person at the park gates between 6.30pm and 7.30pm for the next morning, and 11am to noon for the same afternoon. But queues can form as early as the previous evening.

There are two safari slots each day: morning (roughly 6am to 11am) and afternoon (roughly 3pm to 6pm). Morning safaris are longer and tend to produce more tiger sightings. Note that the exact timing of safaris does vary a little over the course of the year according to sunrise/sunset times.