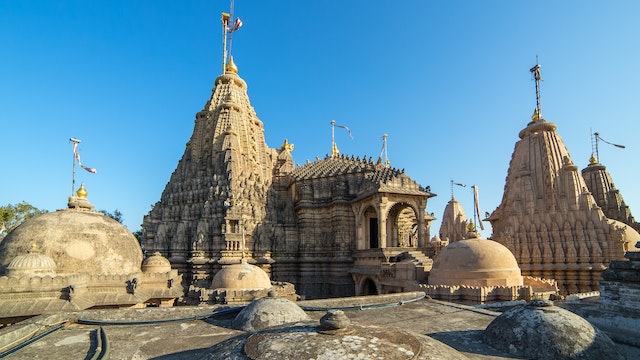 One of Jainism’s holiest pilgrimage sites, Shatrunjaya is an incredible hill studded with temples, some of which are over 900 years old. It's said that Adinath (also known as Rishabha), the founder of Jainism, meditated beneath the rayan tree at the summit. The temples are grouped into tunks (enclosures), each with a central temple flanked by minor ones. The 500m climb up 3300 steps (1½ hours) to the temples adds to the extraordinary experience.

Most days, hundreds of pilgrims make the climb; crowds swell into the thousands around Kartik Purnima, which marks the end of Chaturmas, a four-month period of spiritual retreat and material self-denial that coincides with the monsoon season.

As you near the top of the hill, the track forks. The main entrance, Ram Pole, is reached by bearing left, though the best views are to the right, where on a clear day you can see the Gulf of Cambay. Inside the Nav Tonk Gate, one path leads left to the Muslim shrine of Angar Pir – a Muslim saint who protected the temples from a Mughal attack; women who want children come here and make offerings of miniature cradles. To the right, the second tunk you reach is the Chaumukhji Tunk, containing the Chaumukh (Four-Faced Shrine), built in 1618 by a wealthy Jain merchant. Images of Adinath (believed to have attained enlightenment here) face the four cardinal directions.

You can easily spend a couple of hours wandering among the hundreds of temples up here. The biggest and one of the most splendid and important, with a wealth of fantastic, detailed carving, is the Adinath Temple, on the highest point on the far (south) side.