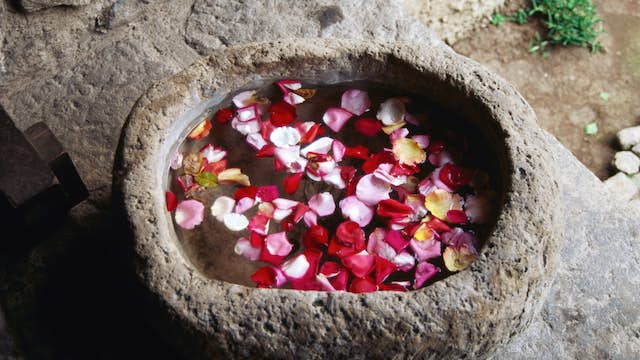 Founded by Dominican friars in 1542, Santo Domingo became the biggest and richest monastery in Antigua. Following three 18th-century earthquakes, the buildings were pillaged for construction material. The site was acquired as a private residence in 1970 by a North American archaeologist, who performed extensive excavations before it was taken over by the Casa Santo Domingo Hotel. The archaeological zone has been innovatively restored as a 'cultural route.'

The zone includes the picturesque ruined monastery church, the adjacent cloister with a replica of the original fountain, workshops for candle and pottery makers, and two underground crypts that were discovered during the church excavations. One of these, the Calvary Crypt, contains a well-preserved mural of the Crucifixion dating from 1683.

Also part of the archaeological zone are six museums, with extraordinarily rich collections presented in top-class exhibitions. All can be visited with one admission ticket. This museum route may be entered either through the hotel or the Universidad de San Carlos extension on 1a Av Norte. Starting from the hotel side, the route includes the following museums: the Museo de la Platería, with silverwork masterpieces including incense burners, candelabras and crowns; the Museo Colonial, with canvases and wooden sculpture on religious themes from the 16th to 18th centuries; the Museo Arqueológico, with ceramic and stone objects from the Maya Classic period; the cleverly curated Museo de Arte Precolombino y Vidrio Moderno, with Maya sculpture and ceramics shown as art pieces alongside glass works by modern artists; the Museo de Artes y Artesanías Populares de Sacatepéquez, with exhibits on traditional handicrafts from the Antigua region; and the Museo de la Farmacia, a restored version of a 19th-century apothecary's shop from Guatemala City.