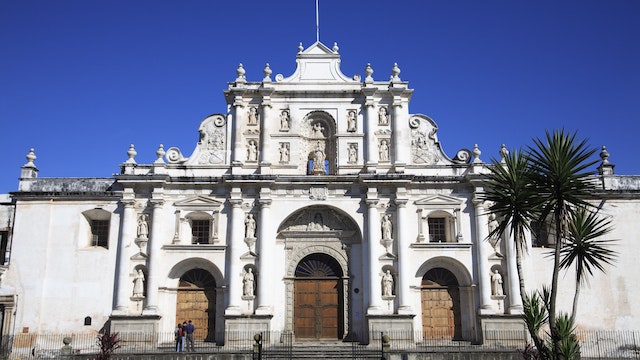 Antigua's cathedral was begun in 1545, wrecked by the quake of 1773, and only partially rebuilt over the next century. The present sliver of a church – the parish of San José – occupies only the entrance hall of the original edifice. Behind it are the roofless ruins of the main part of the cathedral, which are entered from 5a Calle Oriente.

The ruin is a haunting place, with massive chunks of pillars strewn beneath sweeping brick archways and vegetation sprouting from cracks in the walls. Reproductions of the intricate plasterwork figures and moldings between the arches seem all that more impressive against the ruined backdrop. Behind the main altar, steps lead down to a former crypt, now serving as a chapel, with a smoke-blackened Christ.

The main part of the cathedral was built in the 17th century by Joseph de Porres, an architect of African-Maya descent.