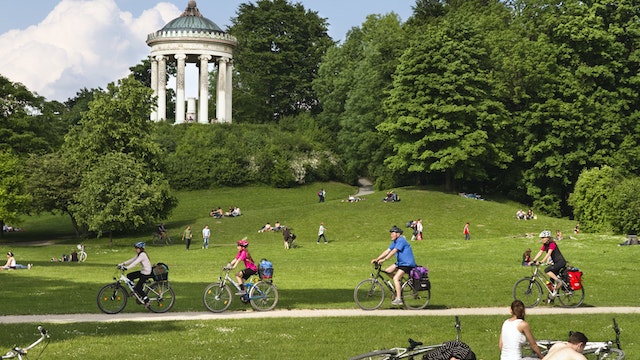 The sprawling English Garden is among Europe's biggest city parks – it even rivals London's Hyde Park and New York's Central Park for size – and is a popular playground for locals and visitors alike. Stretching north from Prinzregentenstrasse for about 5km, it was commissioned by Elector Karl Theodor in 1789 and designed by Benjamin Thompson, an American-born scientist working as an adviser to the Bavarian government.

Paths meander around in dark stands of mature oak and maple before emerging into sunlit meadows of lush grass. Locals are mindful of the park's popularity and cyclists, walkers and joggers coexist amicably. Street musicians dodge balls kicked by children and students sprawl on the grass to chat about missed lectures.

Sooner or later you'll find your way to the Kleinhesseloher See, a lovely lake at the centre of the park. Work up a sweat while taking a spin around the lake's three little islands, then quaff a well-earned foamy one at the Seehaus beer garden.

Several historic follies lend the park a playful charm. The wholly unexpected Chinesischer Turm, now at the heart of Munich's oldest beer garden, was built in the 18th century during a pan-European craze for all things oriental. Further south, at the top of a gentle hill, stands the heavily photographed Monopteros (1838), a small Greek temple whose ledges are often knee-to-knee with dangling legs belonging to people admiring the view of the Munich skyline.

Another hint of Asia awaits further south at the Japanisches Teehaus, built for the 1972 Olympics next to an idyllic duck pond. The best time to come is for an authentic tea ceremony celebrated by a Japanese tea master, though it's only open two days a month.