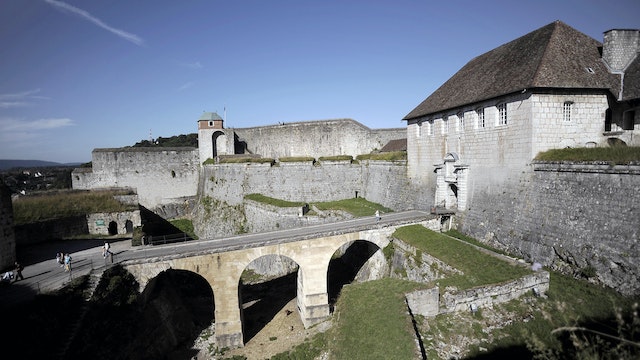 Dominating the city from Mt St-Etienne, more than 100 vertical metres above the old town, the 17th-century Citadelle de Besançon – designed by Vauban for Louis XIV – commands sweeping views of the city and the serpentine Doubs River. Along with 11 other similarly impressive military architectural sites, the 12-hectare Citadelle was recognised as a Unesco World Heritage Site in 2008.

For an introduction to the citadel's architecture, head to St-Etienne Chapel, where a 15-minute multimedia presentation illuminates Besançon's history. The chemin de Rond lets you walk along 600m of the citadel's outer ramparts.

The Musée de la Résistance et de la Déportation is one of France's most in-depth and comprehensive WWII museums. Each room has an information sheet in English but the 20 rooms of evocative photos, documents and artefacts are best visited with a free audioguide. Some of the photographs are unsuitable for young children. During WWII, the Germans imprisoned British civilians in the citadel, and German firing squads executed about 100 resistance fighters here. Nearby, the three-floor Musée Comtois presents local life in centuries past, including food, religion and a colourful puppet theatre.

Kids are sure to be fascinated by the Insectarium, with creepy-crawlies such as tarantulas, scorpions and stick insects; the small Aquarium, where you can admire goldfish and koi; the ho-hum Noctarium, where a few nocturnal rodents like dormice and voles snuffle around; a six-room biodiversity exhibition; and a zoo.

There's a restaurant, snack bar and vending machines around the site.

If you don’t fancy the uphill trudge, take Ginko bus 27 (€1.40) from the city centre or Parking Rodia, which runs from April to mid-October (find schedules on www.ginko.voyage).