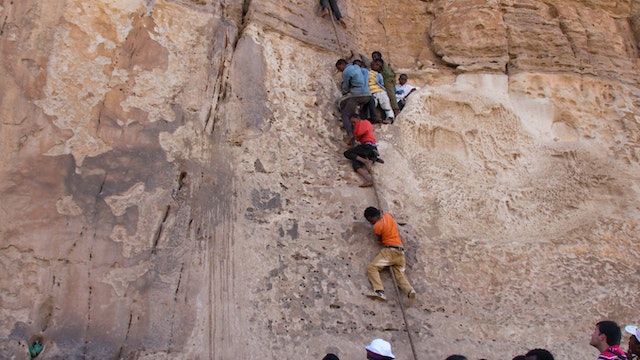 Debre Damo is one of Ethiopia's most important monasteries and is thought to date back to Aksumite times and the 6th-century reign of King Gebre Meskel. The monastery’s formidable cliffs make for one of Ethiopia's most memorable experiences (for men, at least – women aren't allowed up). To reach the monastery, you'll need to scale a sheer 15m cliff; there’s a thick leather rope to help you climb and the monks will tie a second line around your torso and help pull you up.

The whole experience takes some nerves and a good head for heights. (If you’re short of confidence, don’t look at the laces holding the strips of rope together until after you’ve come down!)

It was Abuna Aregawi, one of the most revered of the Nine Saints, who established Debre Damo monastery atop a sheer-sided amba (flat-topped mountain). It may seem like it would have been impossible for the first person to reach this island in the sky, but Abuna Aregawi had God on his side, and God, knowing this was a fine place for a saint to find peace, made a giant snake lower its tail down the mountain, allowing Aregawi to clamber up it to the summit.

The remarkable Abuna Aregawi church is likely the oldest standing church in the country (10th or 11th century AD) and possibly all of Africa. Thanks to a major restoration in 1948 it’s in excellent condition, but still has a truly ancient feel. It’s an almost prototypical example of Aksumite architecture and features the same style of doors and windows found on Aksum’s stelae. Notable are the beams and ceiling, famously decorated with carved wooden panels depicting Ethiopian wild animals. Debre Damo has long been used as a safeguard for religious treasures and its collection includes some of Ethiopia’s oldest illuminated manuscripts.

The monastery's location once allowed Aksumite monarchs to coop up excess male members of the royal family here, thus removing possible threats to their reign. Today it hosts some 150 monks, who are entirely self-sufficient. They grow their own crops, raise their own livestock (all male) and have water reservoirs hewn deep into the rock.

There’s no public transport to Debre Damo, although any transport on the Aksum–Adigrat road can drop you at the well-signposted junction. From there it’s a toasty 14.5km (around three hours) walk. Catching rides to Adwa, Adigrat or Aksum from the junction is tough in the late afternoon. If there’s a group of you, it’s easiest to hire a minibus in Aksum or Adigrat. Debre Damo is usually a first-day stop on Tigray rock-hewn church tours out of Aksum.

Passing deep canyons and terraced barley fields, the road running southeast of Debre Damo towards Adigrat, with its distant views of the Adwa Mountains, is a contender for Ethiopia’s most beautiful drive.