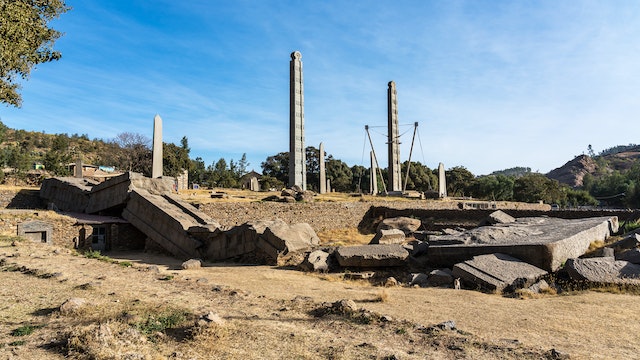 Despite the dizzying grandeur of the numerous rock needles reaching for the stars, it’s what’s under your feet here that’s most important. Amazingly, about 90% of the field hasn’t yet been dug, so no matter where you walk, there’s a good chance there’s an undiscovered tomb with untold treasures beneath. This is part of Aksum’s appeal: the thought that fascinating finds and secrets lurk in the depths. That said, these are some of the ancient world's most striking monuments.

All of the tombs excavated to date had been pillaged by robbers, so very little is known about Aksumite burial customs or the identities of those buried.

Tomb of the False Door

In 1972 the unique Tomb of the False Door was discovered. It lies in the western extremity of the Northern Stelae Field and is thought to date around the 4th century AD. Complex in structure, its stone blocks are also larger and more finely dressed than those found in some other tombs. Comprising an antechamber and inner chamber, it’s surrounded on three sides by a passage.

Above the tomb, at ground level, a rectangular, probably flat-roofed building would once have stood (measuring some 12 sq metres by 2.8m high). Above the stairs descending into the tomb’s chamber was a stone slab carved with a false door almost identical to those found on the stelae. Look for the iron clamps fixing blocks of stone together like giant staples.

Judging from the lengths to which the grave robbers went to gain access, it’s thought to have contained objects of great value. A single stone base that held the sarcophagus can still be seen.

The so-called mausoleum has a monumental portal (hewn from a single slab of granite) marking the tomb’s entrance and is carved with the stelae’s curious false-door motifs. The portal leads into a passageway with 10 chambers. In total the tomb covers some 240 sq metres. Part of the tomb was disfigured at some unknown date by robbers, who succeeded in digging through 1.5m of solid masonry.

Tomb of the Brick Arches

Dating from the end of the 3rd century, this tomb is remarkably well preserved and contains four rock-cut chambers, subdivided by a series of brick arches built with lime mortar. These arches are the same as those that had been in the mausoleum before the grave robbers damaged it.

The tomb was first excavated by archaeologists in 1974, and though tomb robbers had beaten them to it by centuries, they still discovered fragments of gold jewellery, beads, bronze objects, weapons and glass objects. Nobody knows who was buried here, but archaeologists surmise that the tomb contained the bodies of an elderly woman, a man and one other person and that the treasures found within indicate that they were people of high standing.

The tomb remains closed because archaeologists think further excavation is warranted, but you can clearly see one of the arches through the gate.

The megalithic Tomb of Nefas Mawcha consists of a large rectangular central chamber surrounded on three sides by a passage. The tomb is unusual for its large size, the sophistication of the structure and the size of the stones used for its construction (the stone that roofs the central chamber measures 17.3m by 6.4m and weighs some 360 tonnes!). The force of the Great Stele crashing into its roof caused the tomb’s spectacular collapse.

Locals believe that under this tomb is a ‘magic machine’, the original implement the Aksumites used to melt stone in order to shape the stelae and tombs. The same type of machine was apparently also used to create some of the rock-hewn churches of Tigray.