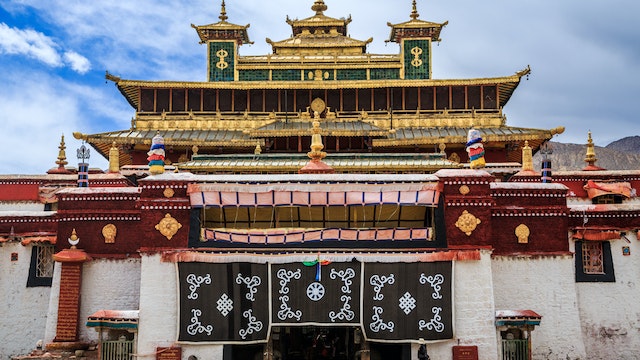 About 170km southeast of Lhasa, on the north bank of the Yarlung Tsangpo (Brahmaputra River) is Samye Monastery, the first monastery in Tibet. Founded in 775 by King Trisong Detsen, Samye is famed not just for its pivotal history but for its unique mandala design: the Main Hall, known as Ütse, represents Mt Meru, the centre of the universe, while the outer temples represent the oceans, continents, subcontinents and other features of the Buddhist cosmology.

As renovation work continues at Samye, the original ling (royal) chapels – lesser, outlying chapels that surround the Ütse – are slowly being restored. Wander around and see which are open. Following is a clockwise tour of the major chapels open at the time of research. Aside from the Ütse, none require any entry fees.

Just inside the East Gate, the square in front of the Ütse has some interesting elements, including the Jampel Ling gönkhang (protector chapel). The top-floor balcony offers fine views of the Ütse. The ruined seven-storey Geku (Tower) that used to display festival thangkas has been rebuilt in recent years, and is once again used to display a large thangka during the Samye Dhoede festival.

From the East Gate follow the prayer wheels south to the Tsengmang Ling, once the monastery printing press, and just beyond the minor Mela Ling. Further on is another renovated chapel, the Ngamba Ling (Subdued Demon Temple), with modern murals and two 3D mandalas.

Past the yellow-walled residential college of the Shetekhang, the restored Aryapalo Ling, Samye’s first building, and Drayur Gyagar Ling, originally the centre for the translation of texts, are worth extended stops.

Beside the Sacred Tree that serves as a popular stop for pilgrims and upon which they place stones and tie threads, the upper floor of the Vairosana Lakhang is lined with old paintings and a small chapel to Tantric Buddhist masters. Just north of here is a small chörten that pilgrims circumambulate.

The Nugko Jampa Ling is where Samye’s Great Debate was held, and an essential stop. Beyond the modern rebuilds of the relatively minor buildings of the Samten Ling and Jampa Lakhang, the delightful Triple Mani Lhakhang just to the north also has lovely murals.

Rounding the corner of the complex past the large Tree Shrine, the first major structure is the Natsok Ling. The chapel is a modern rebuild, but the statues of 21 Taras and the Past, Present, and Future Buddhas are worth a look inside.

The green-walled, Chinese-roofed Jangchub Semgye Ling is well worth a stop before breaking from the kora to walk south along the concrete path here to the Dawa Ling, returning after to the kora path.

East of here is the Kordzo Pehar Ling, the home of the oracle Pehar until he moved to Nechung Monastery outside Lhasa. It was once a highlight of Samye, but only time will tell what it looks like after the ongoing renovation.

Finally, return to the Ütse past the Namdok Trinang Ling. Though quite impressive from the outside, this temple is of relatively minor importance and was not open to visitors at the time of research.

It's also possible to enter the four reconstructed concrete chörtens (white, red, green and black), though there is little of interest inside.

If you walk for 10 minutes beyond the southern gate, you'll reach the Khamsum Sankhung Ling, a smaller version of the Utse that once functioned as Samye's debating centre. It's been under renovation for years, but there are seemingly no plans to reopen it soon.