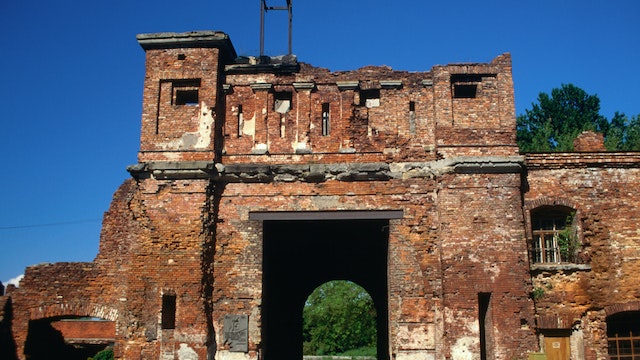 During Operation Barbarossa in the early days of the Great Patriotic War (WWII), a small band of soldiers gallantly held off a superior Nazi force at Brest Fortress and became Soviet legends. Today the fortress is a rambling complex of museums and Soviet memorials dedicated to that siege. It occupies a beautiful spot at the confluence of the Bug and Mukhavets rivers, about a 25-minute walk from central vul Savetskaya.

The fortress was built between 1833 and 1842, but by WWII it was being used mainly as a barracks. The two regiments bunking here when German troops launched a surprise attack in 1941 defended the fort for an astounding month. Under Stalin's propaganda machine, the siege of Brest fortress attained mythical status – a Soviet version of the Alamo or the Charge of the Light Brigade.

Entrance to the grounds is free but you'll have to pay a separate admission price to visit each museum. There are souvenir shops at the entrance, near the tanks and in some of the museums. Bicycles are a good way to explore the complex and can be hired near the entrance for BYN2 per hour.

To get to the fortress from the centre take infrequent buses 17 or 41 from pl Lenina or from any bus stop along vul Hoholya.

Enter the Brest Fortress complex through an iconic tunnel in the shape of a huge socialist star, where sombre music accompanies your passage. Then, on the left, you'll see tanks, often with kids clambering over them. Keep walking straight, cross a small bridge, and you'll see the stone Thirst Statue on your left, a classic piece of socialist realism depicting a water-starved soldier crawling for a drink.

On the opposite (northwest) side of the path from the Thirst Statue are the brick ruins of the White Palace, where the 1918 Treaty of Brest-Litovsk was signed, marking Russia's exit from WWI. Next to this is the Defence of Brest Hero-Fortress Museum, a more than comprehensive look at every minute detail of the fortress's long history and the siege for which it is known. Most placards are in Russian, although there are a few English descriptions.

Heading to the main monuments – among which is Courage, a large stone soldier's head projecting from a massive rock, and a skyscraping obelisk – you'll see an eternal flame and marble plaques bearing the names of those who died (several are marked 'unknown'). CNN once put Courage on a list of the world’s ugliest monuments; you’ll either strongly agree or strongly disagree.

Behind Courage is the attractive, recently renovated Byzantine St Nicholas Garrison Church, the oldest church in the city, which dates from when the town centre occupied the fortress site. Once part of a large monastery before being turned into a soldier's garrison club, it was gutted during the 1941 siege but has been restored and now holds regular services. Inside are some interesting photos of the church's reconstruction, which was completed in 2013.

If you haven't had enough war history, the Museum of War, Territory of Peace is inside the fortress's southern bastion. A newer museum focusing on WWII, it's more modern and more visual than the other museums within the fortress, and most descriptions are in English. The 'battle room' does a good job of recreating the scene of an aerial bombardment, complete with sound effects, and there are interesting multimedia displays mapping German concentration camps throughout Europe.

Next to this is the Kholmskie Gate, its bricks decorated with crenellated turrets and its outer face riddled with hundreds of bullet and shrapnel holes. Pass through the gate, cross a bridge and you'll spot the Bereste Archaeological Museum on the right. It's a large covered archaeological site where peasant and artisan huts from the 12th to 14th centuries have been uncovered.