You want to go bush but don't want to damage the beautiful surrounds, or maybe you don't even want to rough it. You've come to the right place. In this excerpt from Lonely Planet's 1000 Ultimate Experiences we've got the top 10 eco-lodges to help you on your way.

This spectacular eco-lodge on Chumbe, a coral-island ecosystem about 12km south of Zanzibar Town, features seven bungalows that overhang the sea. The Coral Park is pretty damn close to paradise with its 3km sandbar, pristine ocean swells, baobab trees and giant coconut crabs. The bungalows are solar-powered, the toilets are composting and the cuisine is a mix of African, Indian and Middle Eastern. Solitude is guaranteed, given that the island is privately managed and only 14 guests are allowed on at a time.

This eco-lodge is consistently ranked among the world’s best, not least for its pampered service: there are around 150 staff members for 14 couples maximum. Some say this equates to ‘ecohedonism’ but many more don’t care, as long as the environment gets some tender loving care. The island itself is just 500 acres, with natural springs that provide water for the lodge’s organic garden, and you can trek among black volcanic cliffs or frolic along the picture-perfect coral reefs. The latter may look familiar: Brooke Shields herself (or rather, her body double) frolicked naked here in The Blue Lagoon (1980).

If this place were any more self-sufficient it could operate as a base station on Mars. Sitting pretty on the beach, Alandaluz Hosteria is a model for green building practices. It’s mainly constructed from replenishable materials such astagua-palm leaves, and it features a host of organic gardens from which much of the guests’ food requirements are sourced. Compost bogs and treated waste mean that Alandaluz recovers a staggering 90%of all water used; treated water goes on to be used for irrigation.

Basata means ‘simplicity’, and Basata is simplicity itself. Located on the Red Sea, near Nuweiba, Basata is also clean, green and beautiful, surrounded by the Sinai mountains. Littering is strictly forbidden, everything is recycled, and public displays of affection are frowned upon in favour of a community-based family atmosphere. And the accommodation? Bamboo huts and villas on the beach hold a maximum of 250 guests and face perfect coral reefs and blue waters.

Located smack bang in the middle of Lake Baikal is Olkhon, the world’s second-largest freshwater island. And smack bang in the middle (or thereabouts) of Olkhon is Nikita’s, a homestead consisting of wooden houses heated by wood fires and accompanied by lovely old banya (steam baths). Nikita’s hosts will tell you all about Olkhon’s fragile environment and how it’s important to not collect wild flowers, kill butterflies or drive cars all over the shop. They’ll also guide you on ecotours around the island.

This eco-lodge has won awards mainly for its wonderful location, surrounded by tropical rainforest more than a million years old. It also has 15 rustic villas, interesting culinary offerings (bush tucker blended with upmarket modern Australian stylings), and a vigorous range of activities (such as snorkelling and diving around the Great Barrier Reef ). The trickles and splashes of the waterfalls provide a pleasing soundtrack.

Costa Rica is becoming synonymous with the concept of ecotourism and the Arenal Hotel upholds the standard. Its location is a doozy: in the Northern Pacific mountains, with a much-vaunted view across to Volcán Arenal, Lago Coter and Laguna de Arenal. The hotel touts its ‘policy of interaction’ with the local Maleku people as an attraction, and certainly the chance to learn and understand an indigenous culture from the people who actually live it is a special bonus.

The late ‘organic architect’ and environmentalist Friedensreich Hundertwasser designed this hot-springs village in Styria, Austria, with ecological imperatives firmly at the forefront. The village’s composting toilets feed waste to its roof gardens, a process illuminated by Hundertwasser himself. ‘Shit turns into earth,’ he wrote, ‘which is put on the roof/it becomes lawn, forest, garden/shit becomes gold. The circle is closed, there is no more waste. Shit is our soul’. In the end no one pooh-poohed Hundertwasser’s idea, allowing the Blumau Hot Springs Village to open to an enthusiastic reception.

Part of the Green Magic Nature Resort in Kerala, this ecofriendly accommodation is not for acrophobes: it’s 27m above the earth and access is by a bamboo lift counterbalanced by water. The rooms are open plan, of course, and airy and light, naturally. There are two levels, hosting one couple to each, so it’s a fairly low-key scene. The views are awesome each way you turn.

This eco-lodge in Madidi National Park is fully operated and owned by the Quechua people, who lead tours of discovery, teaching tourists the rich heritage of indigenous culture as well as the secrets of the surrounding rainforest and its multitude of inhabitants. As for the lodge itself, it was constructed using traditional methods; waste water is treated and solar power is a feature. 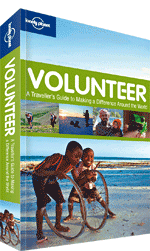 If you're looking for a more meaningful travel experience and want to give back to the communities you visit, then Lonely Planet's Volunteer: a traveller's guide can help.
View all stories