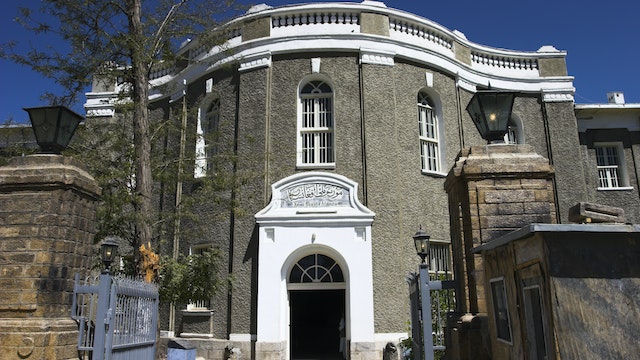 The Kabul Museum was once one of the greatest museums in the world. Its exhibits, ranging from Hellenistic gold coins to Buddhist statuary and Islamic bronzes, testified to Afghanistan’s location at the crossroads of Asia. After years of abuse during the civil war, help from the international community and the peerless dedication of its staff means the museum is slowly rising from the ashes. The museum opened in 1919, and was almost entirely stocked with items excavated in Afghanistan. As the fall of communist Kabul became apparent with the Soviet withdrawal, many of the most valuable pieces were moved into secure storage, but the majority of exhibits remained in situ. Unfortunately the museum quickly found itself on the frontline of the mujaheddin’s terrible fight for Kabul. Between 1992 and ’94 the museum was used as a mujaheddin base. During this period the museum was massively looted – not just ransacked – but with care taken to select the most valuable pieces for resale on the illicit antique market (the museum’s library and inventory was also lost at this time, to hamper efforts to trace the provenance of stolen goods). Among the priceless treasures lost include many of the Bagram Ivories, the Kunduz Hoard of Graeco-Bactrian coins and unique Gandharan statues of Buddha. During this looting, the museum was further damaged by a rocket attack that destroyed its upper floor. When the Rabbani government regained control of the area, soldiers posted to guard the site continued ad hoc looting of their own. On capturing Kabul in 1996 the Taliban vowed to protect what remained, but it was a short-lived promise. In March 2001, as the giant Buddhas at Bamiyan were being levelled, soldiers entered the museum with hammers and smashed what statues and other image-bearing exhibits they could find. The oxymoronically-titled Minister for Culture led the destruction. That a museum still stands is little short of a marvel. Less than a third of the collection survives, but there’s a surprising amount on display. In the entrance hall is a 15th-century black marble basin from Kandahar, known colloquially as the Buddha’s Begging Bowl because of the carved lotus at its base. To the left is a large Greek inscription from Ai Khanoum and to the right is the Rabatak Tablet found near Pul-e Khumri in 1993, covered with yet-to-be deciphered Bactrian script. Further on, a pair of glass cases display Graeco-Bactrian Buddha statues from the 3rd and 4th centuries AD in limestone and schist, the few to escape the Taliban’s rage. Other treasures downstairs include a lovely carved marble door from Kabul, and a reconstructed stucco section of a 12th-century mosque from Lashkar Gah. Exhibits are interspersed with photos of looted items and the half-demolished museum. The highlight of the museum is the Nuristani gallery upstairs. It is filled with huge wooden deities and ancestor figures, carved before the 1890s when the region was still pagan. Goddesses ride mountain goats, warriors sit astride horses and loving couples are carved on posts for the marital bed. As works of art they’re radically different to anything from elsewhere in Afghanistan; the flat mask-like faces seem more Central African than Central Asian. The statues were chopped up by the Taliban, but have been magnificently restored. Security is tight at the museum, with bag checks as you exit as well as on entering. While you wait, take a moment to read the plaque outside the front door: ‘a nation stays alive when its culture stays alive’. The old royal palace of Darulaman sits opposite the Kabul Museum. Built by Amanullah in the 1920s, in grand European style, the palace is now little more than an empty shell. Don’t explore the palace too closely as there are still unexploded ordnances (UXOs) in the area. Between the two look out for the rusting steam train, more evidence of Amanullah’s ill-fated experiment in modernity – only a few miles of track were ever laid.